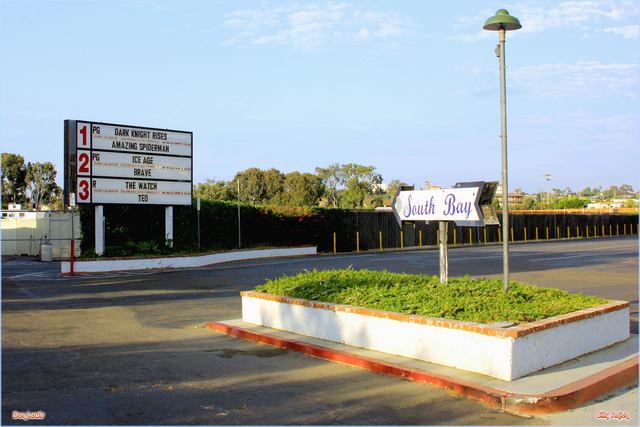 Opened on July 11, 1960 with Yul Brynner in “Once More with Feeling”. The South Bay Drive-In is San Diego’s last remaining drive-in. Its three screens feature current double bills from all the studios. Recently, projection was upgraded using the Technalight lamp technology, producing the brightest and sharpest images possible in a drive-in theatre. Audio is delivered by broadcast FM.

The theatre is open all year, seven days a week. Admission in 2010 is $7 for adults. Kids, under 12, are admitted for $1. The popular swap meet operates all year on Wednesday, Saturday and Sunday.

The South Bay Drive-In, open since 1958 at 2170 Coronado Avenue, is one of only two San Diego drive-ins remaining in operation today. One mile north of the border and with space for up to 1500 cars, it was another William Oldknow/Sero Amusements venture (still run by Oldknow’s company, now called De Anza Land & Leisure Corporation). Originally called the Bayview and sporting a single screen, in the mid-‘70s the South Bay added two more screens. Most of the speaker poles were phased out for AM sound in 1972, and then FM beginning in the early '80s (movies are currently broadcast in stereo, via FM only). The snack bar has been renovated a few times, most recently sporting a nautical theme, with the entire concession building painted blue and white and designed to resemble a ship, portholes and all.

Local legend has it that actor Matthew Modine used to work at the South Bay. “Actually, that was his father, Mark Modine, who worked for us,” laughs De Anza operations manager Teri Oldknow. “That was in the ‘70s, and they had, like, eight kids who all grew up at the drive-in. His sister still works there to this day.”

When I mention to Oldknow my recollection of how run-down this drive-in got in the early ‘80s — with frequent gang activity, drug trade, and other scary goings-on — she says, “I know it was bad. There were plans to sell around that time. I wasn’t with the company then, but the attitude was kind of like 'We’ll just let it go long enough to get a good offer and then sell it.’ I started here in 1996, and that was one of my big pushes, to revive places like that and make them better than ever. If you manage a drive-in properly, you keep it fun, keep it clean, keep it safe, there’ll be so much business you’ll have to turn customers away.” The company also runs the six-screen Redwood in Salt Lake City, the four-screen Mission in Pomona, the four-screen De Anza in Tucson, and the three-screen Van Buren and three-screen Rubidoux in Riverside, California.

The De Anza company really goes all out for the Starlight Drive-In near Atlanta. This well-advertised ozone regularly hosts pop-culture conventions and car shows on its lot during the day, and frequent “Drive-In Madness” theme-athons (often with live band performances) run all night long. “We had [exploitation filmmaker] Dave Friedman there last year for Blood Feast,” Oldknow says. “His offices used to be across the street from ours in L.A., and we’d share the same screening room. We can get away with that at the Starlight because it’s an industrial area with no neighbors but a cemetery and a landfill. We can’t do adventurous stuff like that at the South Bay because we’re surrounded by residential properties. Neighborhood people are going to complain no matter what you do, so we’re reluctant to have that kind of programming there. I’d like to, though, maybe timed around the Comic-Con.”

A swap meet has run on the lot since April 1977, operated by the drive-in’s owners rather than being leased out as at other area ozones. It appears to have been the area’s third drive-in swap meet (Midway began leasing to Monte Kobey’s swap meet the previous summer, and the Valley Drive-In held an Oceanside flea market as far back as 1971). “That’s why the South Bay survived,” says Oldknow. “There was that early recognition of how to turn daytime use into profits on the property. There’s no overhead for a swap meet, whereas we’re paying 50 percent of our box office take to the studio for movies. Swap meets were the only thing enabling most drive-ins to survive the ‘80s. We’re charging money for parking spaces and keeping all the proceeds…this was so profitable that it would be difficult for other businesses to compete for the property.”

The main screen number one at the South Bay blew down during the early 2003 winter storms and had to be replaced that spring, at a cost of around $60,000. In summer 2005, a new Technalight installation was done on the projectors for all three South Bay screens. “That increased the picture brightness from five to nine times brighter,” says Oldknow, “so it’s as bright as any indoor screen now.” Open seven nights a week, 52 weeks a year (admission $6 per person, children nine and under free), it may be the only drive-in in the U.S. to serve menudo.

Here’s an addition to the article excerpt above:

Reader reader Tony D. Metal emailed me to say â€œThe South Bay Drive-In was always a trip. The back rows were reserved for the lowriders. Somewhat intimidating, they did draw attention. However, everyone got along. The whites and Hispanics showed mutual respect, and we were on their turf, but the drive-in was for all to enjoy. No racial barriers. We all got along very well.â€

In 1986, Nestor’s Swap Meet on the South Bay lot was the only area Meet to operate on Wednesdays. This created a big problem with the ozone’s neighbors, who said the parking shortage resulted in vehicles overrunning the entire area, often blocking driveways or even parking on people’s lawns. Swap Meet attendance was said to be from 3,500 to 5,800 patrons every Wednesday.

“We’ve taken a lot of steps to improve this,” Stephen L. Pentoney, secretary-treasurer for De Anza Land and Leisure Corporation told the San Diego Union-Tribune. De Anza began offering lower admission prices to patrons who parked in the theater lot instead of outside on city streets. They also built a wall to keep patrons out of the Meet until 7 a.m., allowing the parking lot to open 45 minutes earlier and thus cutting down on parked cars backing up outside the facility at sunrise. Barricades were also erected, to detour traffic away from neighborhood streets, with six hired security guards to redirect traffic.

De Anza also got Swap Meet exhibitors and patrons to mount a write-in campaign to Save the Swap Meet. In addition, they distributed pamphlets called “It’s Your Last Chance to Save the Swap Meet,” with a list of “dos and donts” about parking and driving on neighborhood streets. These efforts resulted in De Anza’s “conditional use permit” being extended to cover the Wednesday events…

The Reader just posted an expanded version of the San diego drive-in history, twice the length of the original and with a bunch of graphics that didn’t run with the original published version —– in case anyone wants to checkitout!

Anyone know how to get the coming week’s features for the South Bay before Thursday night when they go up online and to the phone-line? The current system is a drag.

Five dollars for adult admission is dirt cheap.Surely, it has gone up since the above header was written.They charge a lot more for adults here at the closest Drive-in to me,THE BIG-MO.In South Carolina where everything is cheaper,I live in Georgia.

We always make time to visit this spot when we’re in SD for a period of time. I LOVED their main field that used to have that ginormous slightly curved screen. The wind blew it down and it’s replacement is a bit smaller to me.

Checking the Chula Vista Star-News, through Aug. 11, 1960, it listed its “area drive-ins” as the Harbor (National City) and the Big Sky (Chula Vista). By Aug. 18, 1960, the South Bay was included in that roundup and was advertising.

Boxoffice, July 4, 1960: “Columbia contractee Jo Morrow appeared at the premiere of the new South Bay Drive-In in San Diego to cut the ribbon prior to the screening of Columbia’s "Once More, With Feeling.”"