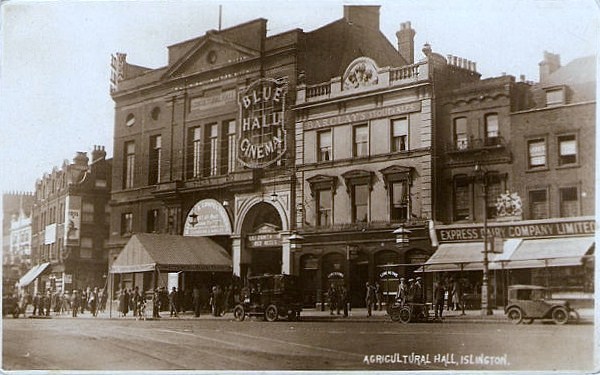 Located in the north London inner-city district of Islington. Built in 1869 as part of the Agricultural Hall complex, this building was originally intended to be used for the showing of pigs! First known as Berner’s Hall, it became a concert hall known as St. Mary’s Hall and had a beautiful Beaux-Arts decorative scheme within the auditorium which had seating provided in stalls and balcony levels. The architect was Frederick Peck.

It became the home of the famed ‘Mowhawk Minstrels’ from the USA and was re-named Mowhawk Hall. It showed its first film show on 3rd August 1900 and became a full time cinema from 5th August 1901. In 1902 it was taken over by Walter Gibbons and became a variety theatre known as the Empire Music Hall, but films were retained as part of the bill.

It reverted back to full time cinema again from 1908 and was renamed the Palace Cinema. Re-named the Blue Hall Cinema in 1918 it was taken over by the General Theatre Corporation(GTC) in March 1928 and they were taken over in May 1928 by Gaumont British Cinemas.

It was re-named Gaumont from 2nd July 1951 and closed on 5th January 1963 with Peter Sellers in “The Millionairess” and Cecil Parker in “The Navy Lark”. The building was converted into a Top Rank Bingo Club which remained in operation for many years. It was during this period that the building was Listed Grade II.

Sadly, the Listed Building status did not help it survive, as plans were put forward to revive the usage of the main Agricultural Hall building as a major convention and exhibition space. Bingo in the old Gaumont Cinema ended on 7th June 1975 and the building lay empty and deteriorating until it was demolished in 1985. It was destroyed to make way for an ‘open view’ of the refurbished Agricultural Hall and the land where it stood has been grassed over.