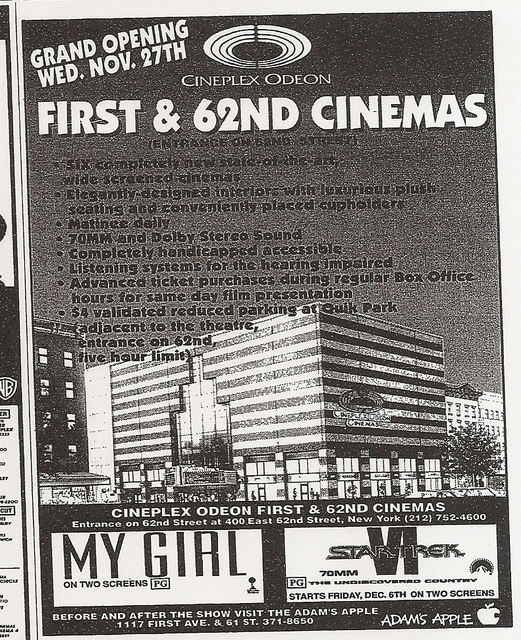 Dismissed by locals from the day it opened on November 27, 1991, this multi-level 6-screen multiplex survived many years while many other Upper East Side theatres continued to close. Built by Cineplex Odeon as the long delayed replacement for the highly sought after Baronet & Coronet property, the site never gained the clout it needed and the Baronet & Coronet lasted longer as a result. It opened as a sixplex, and later a seventh screen was added in a vacant storefront on the ground floor, giving a total of 1,931-seats.

A Garth Drabinsky faux marble plex with good sound, smallish screens, and a victim of that unique Manhattan crime of being one block too far.

A battle with the city over the escalator caused several aborted openings. The seventh screen apparently came and went.

In May 2013, Clearview Cinemas were sold to Bow Tie Theatres, but this movie theatre closed in June 2013. In 2015 a section of the building was in use as a storage facility. In November 2016 it was taken over by Mexico City based Cinemex and renovation began. It reopened as the CMX Cinemas New York 62nd Street on October 18, 2018.

This theatre is another casualty of the COVID-19 pandemic, it was shut down permanently on March 17, 2020. The building has been gutted.

“SCENT OF A WOMAN” was supposed to open on both screens at the Manhattan Twin but was moved here at the last minute when the director complained about that theatre’s presentation.

I just looked in the photo section and see that adult admission is $25.

Unbelievable! Who in the world would pay such a steep admission price when there are so many other options…?

Not to go too far off-topic, Al, but I remember the Manhattan Twin’s era of screening primarily genre films and move-overs. Was it considered a less-than-ideal theatre in general?

At least during the midweek it $17.

Opened(on different screens) with “Mobsters”, “Another you”, “My girl” and “Star Trek VI the undiscovered country”.

Is the name CMX short for anything?

did not take long to find the answer to what CMX stands for by googling CMX cinemas- https://en.wikipedia.org/wiki/Cinemex

theatre closed March 17, 2020 when the city ordered theatres shutdown. When CMX went into chapter 11, they won’t be opening this location.