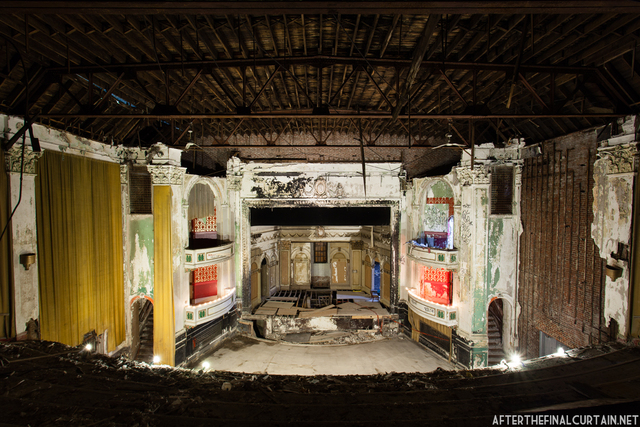 The Fairmount Theatre in the Hyde Park section of Boston was opened in 1915 as a vaudeville and film neighborhood theatre. It was originally called the Everett Square Theatre and briefly the New Pixie Theatre.

During the 1950’s it was an ATC - American Theatres Company movie house. After it closed, it served as an auction house. Now, a group has taken it over, cleaned it up, and has plans to reopen it as a live theatre.

Ron you might like this more- some shots from inside the theatre at the lighting event: http://www.boston.com/yourtown/boston/hydepark/gallery/everett_square_theatre_restoration/

It’s nice to see the new sign and also the refurbished foyer. I was surprised when looking through the photos posted in the link above to see that the stage has some sort of fancy wood structures on it, something like the enclosed stage of Jordan Hall in Boston. I hope that this restoration project continues.

Well, the last picture I saw of the theater interior in the 1990s, the ceiling plaster had collapsed from water damage. Looks like the owners have stabilized it, but it’s a long way off from being restored, and, quite frankly, it’s out of the way with no nearby parking in a congested neighborhood, so future use would be limited.

This was the movie theater that I frequented throughout my childhood and into my teens. We moved to Hyde Park in 1961 and my family rarely missed a weekend matinee. As it transitioned into the Nu Pixie Cinema in the 70’s I began attending the evening shows with my friends. This beautiful theater was a huge part of my childhood. The matinees were filled with kids from Hyde Park. They ran mostly genre films during the matinees but I especially remember the science fiction and horror film double features. I would love for them to restore the theater to its former glory. I remember that the entrance was a covered area with no doors. You would walk in and there were posters lining the walls on either side showcasing current films and the films that were coming mid-week. I believe that features ran Sunday, Monday and Tuesday with a change on Wednesdays. The ticket booth was on the right near the entrance doors. It was a rather small booth, only large enough for one person. You would walk through one set of swinging doors followed by a second set, I believe. Then you would be in the lobby proper. On the left was the concession stand and on the right on sandwich boards would be one sheets for the films that would be playing the following week. Right after the concession, the ladies room was on the left followed by the stairs that would take you up to the balcony, which was not always open. Opposite the stairs were two sets of swinging doors leading to the theater. The theater itself had three sections of seats divided by two aisles. On either side of the stage were the boxes, two on each side. These were never used as I recall although you could access them via stairs. The theater was managed/owned? by a wonderful gentleman and his wife. There were basically three melodies that played while we waited for the theater to start. They were The Lady From 29 Palms, Honeycomb and Can’t Get Use to Losing You. When the movies started we usually got a cartoon before the feature followed by a feature, an intermission, previews of coming attractions, another cartoon or short subject or a serial (Captain Video comes to mind) and the second feature. When we first starting attending I believe tickets were 25 cents for kids under 12 and 45 cents for adults. That is all that comes to mind off the top of my head. As I think of other things I will post.

I recently photographed the Fairmount/Everett Square Theatre. Check out a blog post at After the Final Curtain

Bravo, sir. Beautiful photos. The theater may now have a skeletal appearance, but I can recall it vividly using your photos as a frame of reference. I wish that I could explore it. if there were someone to contact, I would love to walk through it. We almost literally attended every weekend matinee at the Fairmount. Sometimes we would go to rhe drive-in or the Rialto in Roslindale , the Hancock Village Cinema on the VFW or the Oriental in Mattapan but by and large it was the Fairmount. Sunday Mass, Sunday dinner and a double feature at the Fairmount was the norm. The husband and wife who managed?/owned? the theater knew us on sight.

When is the expected completion date of this restoration? It seems to be taking a very long time.

No recent updates though – not sure what their current status is, but the front façade, new marquee and restored foyer all look great.

They don’t have a date yet because they are still trying to raise the funds for the restoration!