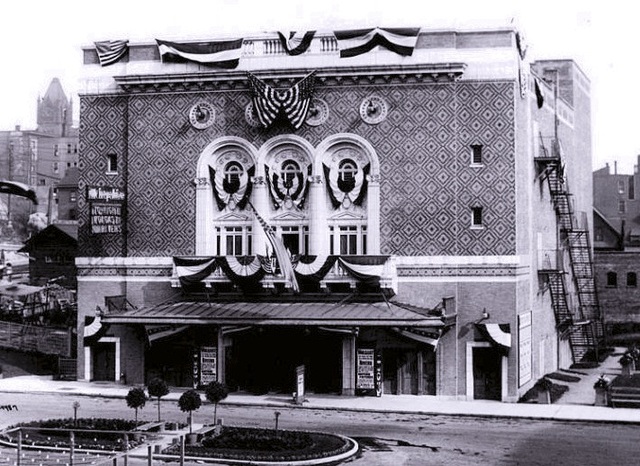 Opened on October 2nd, 1911, the Metropolitan Theatre was designed by architect Abraham H. Albertson of the architectural firm Howells & Stokes. Originally a stage house, it began showing movies within two years of its opening, and alternated between presenting live theatre and movies throughout its history.

Between 1925 and 1928, the Olympic Hotel was built on three sides of the theatre. The Metropolitan Theatre was eventually demolished so that a new entrance to the hotel could be built. The final performance in the theatre was a stage production, on December 4, 1954.

Here is a brief essay about the Metropolitan, on the occasion of its closing, from the Online Encyclopedia of Washington State History. There are three small photographs of the theatre.

There is also an interesting bird’s eye view of the demolition of the Metropolitan in 1956.

In her memoir Memories of a Catholic Girlhood, Mary McCarthy wrote of her Aunt Rosie, who at one point had managed the musical events at the Metropolitan Theatre:
“Thanks to her theater connection, she had known Houdini and the Great Alexander and could explain the magicians' acts by the fact that there was a trap door on the Metropolitan Theatre’s stage.”

The entry for Abraham Albertson at the Pacific Coast Architectural Database says that he arrived in Seattle in 1907 and served as the supervising architect for the Seattle office of the New York City firm Howells & Stokes for the next ten years.

An ad for the Flour City Ornamental Iron Works in the 1913 edition of Sweet’s Catalog of Building and Construction attributes the design of the Metropolitan Theatre in Seattle to the firm of Howells & Stokes.

Handsome exterior and landscaping outside. Too bad it was never used for part of the Olympic Hotel. Any pics of the inside?

Seattle bus 36, a 1937 Ford “Transit Bus” (a front-engined design), photographed in 1937. It is at a stop westbound on University Street between 5th and 4th avenues. The lefthand portion of the building in the immediate background still stands, as part of the 1924-opened Fairmont Olympic Hotel (listed on the National Register of Historic Places), but the righthand portion – which in actuality was a separate building, the Metropolitan Theatre, opened in 1911 – was removed after the theatre’s closure in 1954, and was replaced by an entrance courtyard for the hotel. The separate building in the lefthand background was demolished many years ago and the site is now occupied by a plaza in front of the IBM Building. Item 11818, Engineering Department Photographic Negatives (Record Series 2613-07), Seattle Municipal Archives