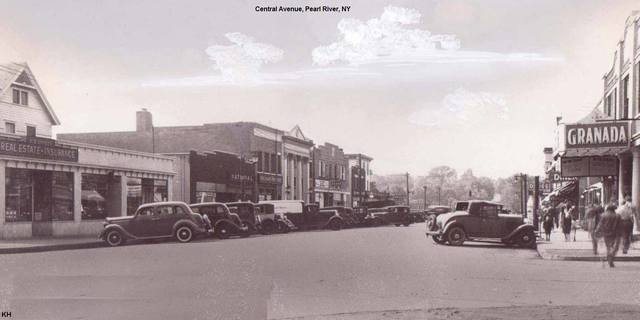 The Granada Theater was built in 1922 for use as a vaudville playhouse. On February 18, 1966 it was renamed the Pearl River Theater and converted to a single-screened movie house. There has been recent interest in reviving this theater for mixed-use venues (movies, shows, concerts and as a community center).

It was demolished apart from the façade and retail & housing now occupy the site.

As a matter of interest, the American Motion Picture Directory 1914-1915 lists a Carnival Theatre in Pearl River (no address given).

The “Granada Theater” in Pearl River, New York, was renamed the “CENTRAL THEATER” at some time prior to 1959. The Central Theater remained its name till 1964, when a fire destroyed much of the structure. While the building was being reconstructed, another theater was built and opened up the street, stealing the “CENTRAL” name. When the “PR” or “PEARL RIVER THEATER” opened its doors in 1965, some changes had occurred to the structure. The original theater lost half it’s lobby to a Barber Shop. The concession stand moved from behind the loge to the front of the building. The stagewas rendered unusable due to a short sighted archetect, who placed
the major portion of the airconditioning unit behind the screen.
The dressing rooms were pretty much in tact,though only used for storage, when I worked there the summer of 1971. At the time that I was an usher there, the theater was owned and operated by the “TRU-DEB THEATER CORPORATION…they also operated the CENTRAL THEATER up the street. The NEW PEARL RIVER THEATER opened its doors to show Disney’s "That Darn Cat"starring Dean Jones and Haley Mills in 1965.

My grandfather Scott Falt owned a diner next to this theater it was called the Granada. He sold this diner to a family called the Marinos. The diner caught fire a damaged the movie theater. This theater and the newer one in town were owned by Mr. Sherman. Mr. Sherman also built another theater in the Spring Valley/Hill Crest area.

As a kid we would go to the movies for .14 cents to see an Elvis movie they would over sell the tickets and kids would sit on the stairs up in the balcony.

Mr.Sherman also owned the strip stores were Mel’s Army and Navy store is.I worked part time for Mel and sometimes he would have me take his rent to Mr. Sherman who had an office in the movie theater.

Mr.Shermans office was in the left hand front of the theater up by the movie screen.

After 3+ years for trying to re-open the Pearl River Cinema, the PRDC lost the fight and the theatre will be used for retail space.

Not good for Downtown Pearl River which has fallen on hard times since BOTh theatres closed in 2000.

A victim of the HUGE MEGA MALL!!