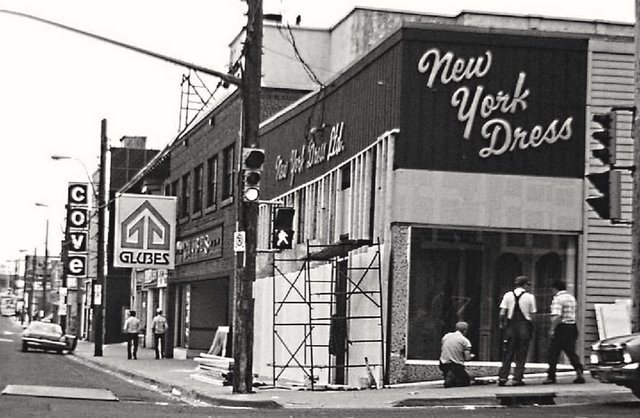 This is one of the few remaining theater buildings in downtown Halifax. It opened as the Vogue Theatre on April 29, 1948 with Bing Crosby in “Blue Skies”. It was taken over by Famous Players in 1970. In 1972 it went over to screening adult movies and was renamed Eve Theatre. It became the Cove Theatre in 1974 and went back to mainstream releases. Closed by Famous Players on August 25, 1985.

In 1987 it became a gay bar & community centre named Rumours. In 1993 it returned to cinema use as a repertory theatre named Wormwoods Dog & Monkey Cinema, which closed in February 1998. In the early 2000’s, the owners planned renovations and were seeking buyers to stage live performances. This never came to fruition.

Here is a link with photos of the restoration:
http://www.360opticalart.com/VT/Cove_Theater/

This camcorder footage was taken in the 80s or 90s, and at the 03:53 mark, drives by the Casino Theatre, immediately followed by this theatre. Both had already been closed at that time, but recently.

This theatre was opened on April 29, 1948 as the Vogue Theatre, showing the Bing Crosby film “Blue Skies.” It was purchased by Famous Players in 1970, renamed Eve in 1972, and started playing adult films. In 1974, the theatre was renamed the Cove Theatre and returned to playing first-run films. It was closed by Famous Players on August 25, 1985 – the last film shown was “Mad Max Beyond Thunderdome.”

In 1987, the theatre was transformed into an LGBT community space and bar called “Rumours.”

In 1993, the building returned to movie theatre use as Wormwood’s Dog and Monkey Cinema, Halifax’s only dedicated repertory cinema, showing foreign films and arthouse films. Wormwood’s closed in February 1998, and the building served as variety of purposes before becoming Palooka’s Boxing Club in 2008, and a television studio for Global Television in 2012.

(information partially sourced from this article.)

The Canadian Motion Picture Year Book 1963/64 lists 945 seats when it was still named “The Vogue.”