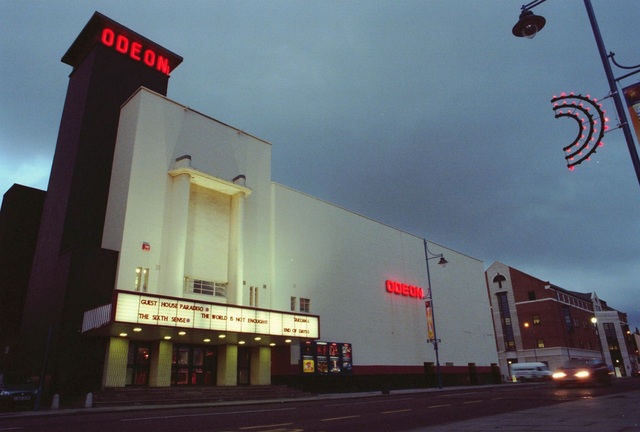 The Odeon was built for and operated by Oscar Deutsch’s Odeon Theatres Ltd chain. It opened on 25th February 1939 with George Formby in “It’s in the Air”.

Designed by Harry Weedon who was assisted by W. Calder Robson, the facade was dominated by a square tower over the entrance which was clad in black tiles. The auditorium block ran parallel to the street at right-angles to the entrance. Decoration within the auditorium consisted of a scalloped edge canopy above the proscenium opening and an ornate ventilation grille in the ceiling. The projection box was located above the seating in the rear of the balcony. Seating was provided for 1,034 in the stalls and 727 in the balcony and it was the largest cinema on Teesside.

The auditorium was converted into a triple screen cinema from 29th September 1974 with 720 seats in the former balcony and two screens seating 110 each in the rear stalls area. In 1989 a fourth screen seating 254 was created in the former front stalls area.

Jumpin' Jaks closed in 2005 and in January 2006, plans were put forward to demolish the former Odeon and build a 27 storey high-rise block of residential units on the site. The Odeon was demolished in July 2006.

A vintage photograph of the Odeon Middlesbrough in 1939, soon after opening:
View link

A recent photo of the Odeon as Jumpin' Jaks here:–

recently taken photos inside the building, during demolition stripping out works..
http://www.flickr.com/photos/jbn6773/

Part of Middlesbrough Town Centre was cordoned off today, when part
of the former Odeon Cinema (Jumpin Jaks) collapsed during demolition
works. The auditorium wall on Fry Street came down at around 10.30am
taking with it scaffolding, this fell onto the street below,
damaging cars. Luckily no-one was injured and work was stopped until
the Health & Safety executive surveyed the site. Corporation Road &
Fry Street remain fenced off and will not re-open until Wednesday
Evening to allow emergency demolition work to remove the remainder
of Fry Street and the Corporation Road Auditorium walls and
scaffolding. It appears the wall gave way when work to remove the
auditorium ceiling and roof from inside the building by bulldozer
was in progress. An article from the Evening Gazette can be seen
at:
View link
26method=full%26siteid=109975%26headline=wall%2dfalls%2din%2dtown%
2dcentre-name_page.html

I have also posted some photos taken tonight at :
http://www.flickr.com/photos/jbn6773/

re try the gazette link

Another shot whilst still a cinema here:–

The cinemas on Teesside ranked in size as follows:–

Therefore, the Odeon Middlesbrough ranked 5th largest when using seating capacity as the yardstick as opposed to the size of the sites. The 2 ABC’s and the Hippodrome,having deep stages (with fly towers),most probably were still the 3 largest buildings by site size.

The Odeons Stockton and Middlebrough had shallow stages and no flies, although the original Odeon Stockton did ‘muscle in’ with live shows in the 1960’s along with the ABC (Globe) and the Essoldo/Hippodrome Stockton.

Strange that 3 Stockton cinemas had frequent live shows and yet the cinemas in neighbouring (and larger) Middlesbrough did not.

I have uploaded 3 photos’s of the projection rooms at the Odeon from the late 70’s and one from 1981. I worked in projection alongside Jack Claxton (Chief) and Maurise Clarke and John Layfield from 1968 until 1982 ( but worked at the Odeon Stockton in between 1971 to 74. Very happy times there with the Appletons who were Mother and daughters, Sheila, Carol, Anne and Debbie.

Keith55 Fantastic to see more pictures of the Odeon Middlesbrough and would love to see any others that you may have. This was my one of my regular cinemas as a child and throughout my teens and I have very fond memories of visiting this cinema many times. I remember the cinema getting converted to 4 screens in the late 80s when a new screen was built on top of the protruding screens 2&3 and reopening the original projection box for the new Screen 1 with the old downstairs Screen 1 projector being used for the new Screen 4 which was located in the disused front stalls and original screen position.