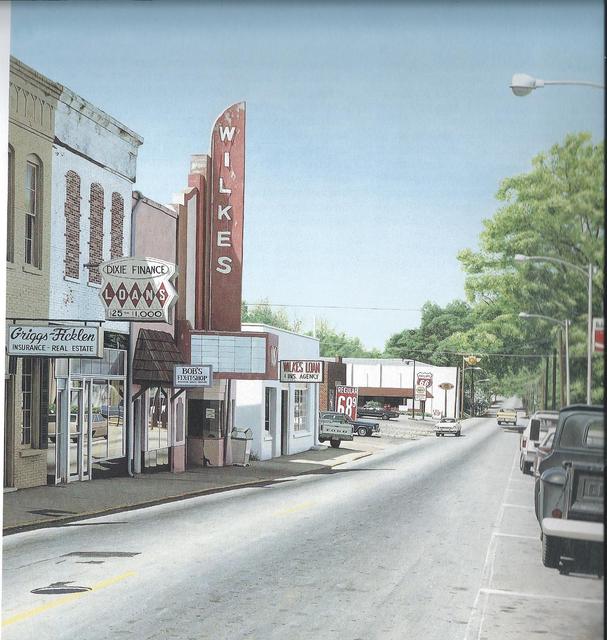 It is simply amazing the Wilkes Theatre was ever allowed to be torn down in a city like Washington that prides itself on such historical treasures.

The Wilkes Theatre was on the end of downtown Washington, about half way between Augusta and Athens. As a child going to Athens for Georgia Football games, my dad and I would drive right by the theatre.

On the outside of town there was a hot dog joint and we would eat there. Beside the take-out window were little handbills for features coming to the Wilkes Theater. I think most of the time I wanted a little movie ad handbill to look at and keep. Wish I’d saved one. Well, I took ‘em home later to lose them!

One night coming back from the ballgame the lights were on the rusty red sign. The vertical marquee or name sign was a regular look for those theatres that wanted something more than a simple marquee. The spire in Wilkes reaches higher than the small town roofs around it. It hits the sky, I remembered, with an indian feather look.

That night the Wilkes was playing “Rosemary’s Baby” and I thought how scary that movie must’ve been! Funny how you never forget certain movies! I know when I drove by in 1981 it was closed -
darkened to the world. Many years later instead of taking the little by-pass around Washington I decided to drive through town for a look at the Wilkes Theatre. Like so many theatres on Cinema Treasures – a parking lot!

According to the historical society, they were, as they told me, “very upset not to have been able to save the Wilkes.” And yes, the theatre was torn down for a parking lot.

The Wilkes was a Martin Theatre of Georgia. I guess it seated 500 or 600 folks – don’t know if it had a balcony.

Unlike the KNOX THEATRE,the concessionstand was inside the WILKES theatre. It would not surprize me to find out it had a balcony; The lady i spoke to with the historical society could not tell me if Washington,Ga. Had a Drive-in.Even though in my Motion picture Almanac 1956 lists one.

Luckly I do have a picture of this theatre.Maybe the only one.

Mike Parking Lots have very little overhead as you know.But they do make a lot of money in the 10 to 20 years they are in business.Most of the time this money is used to start another business. I friend of mine who used to work for LOEWS, like me works for Central Parking which runs most of the parking lots and garages in Nashville believe me they make lots and lots of money.

Yeah, but this is a small town and a town that prides itself on saving Historical buildings. You aren’t talking about Parking lots like in NASHVILLE.I talked over the phone to the History Society and they were upset about not being able to save it.A man and wife i was told have a little coffee shop there that is styled like an old theatre. But I have never been there.

DAVIS CONE painting….. there it is guys….

Wow what a great Art Deco blade sign. Must have been a stylish theatre in it’s day. Yes a tragedy that a parking lot is the afterlife of these larger than life buildings/treasures.

yep,,, have no idea where the old drive-in was..

I only remember the WILKES,Chuck, not saying there wasn’t a STAND, but in my years of going thur there before the by-pass was built I never saw it..