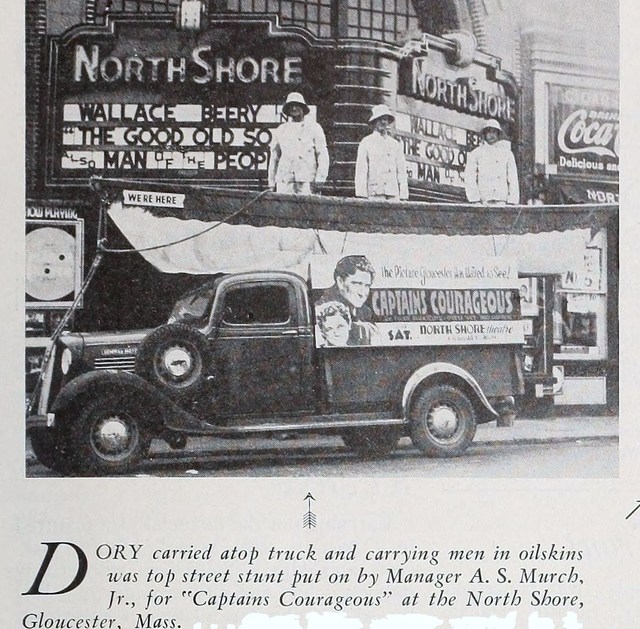 The North Shore Theatre was the leading movie theatre in Gloucester during the 1940’s and 1950’s. It was on the east side of Main Street in the center of the business district. It had an arch over the marquee and a balcony inside. Any further information about it will be appreciated.

My older brother and I used to attend movies at the North Shore during the late-1940s and early-1950s when we spent summers in Lanesville. We saw (I think) “Strangers on a Train” there, and on Tuesday evening, July 29, 1952, we saw Martin & Lewis in “Jumping Jacks”. The MGM Theatre Photograph and Report form for the North Shore Theatre lists the seating as: Orchestra, 978; Balcony, 98; Loges, 72; total seats: 1148. I assume that the theatre was probably built around 1915 -25 period. Nearby, on Main Street was the Strand Theatre, which had 975 seats and was run by the Levinson Circuit at one time. The Strand also had the characteristic arch over the entrance like the North Shore. The North Shore was a M&P theatre, as was the Union Hill Theatre somewhere in Gloucester, a house about which I know nothing.

The North Shore in Gloucester is listed in the 1927 Film Daily Yearbook as having 1200 seats and open daily.

I remember being at this theater twice. Once in the very early 60s to see Babes in Toyland and the other in the late 60s to see Joy in the Morning with Richard Chamberlain and Yvette Mimieux. Oh wait…I also saw…i had forgotten this….a rather racy film called The Fox.

Kind of difficult to remember all the details but I worked at the North Shore for two years, back in 1953 and 1954, during my junior and senior high school years. Worked as an usher, ticket collector, and marquee/poster changer. For a kid, just a great job, lots of perks. Really a great group of people where working there at the time, I got quite an education from the guys in the projection booth. It was during the days of the movie industries early attempts at the 3-D movie, 3-D glasses and all. At the time the “House of Wax” was the name of one of the 3-D movies we running. I recall it was a Mr. Bryant was the general manager, worked days and a Mr. Sprague (same person as the career counselor at GHS) was the night manager. Didn’t make much money but saw a lot of movies of free. We also had a agreement with the Strand Theater where North Shore employee’s could go to there theater to see a movie and visa-a-verse. I can still recall the late nights closing up the theater, eating at the Cape Ann dinner, heading of Nick’s before it closed, taking the bus home and getting up the next morning of school. Ted Carroll ()

This may have survived into the 80’s. I remember seeing ads for a twin cinema in Gloucester. Also a union projectionist who worked there told me that the equipment was pretty old, in fact he said it still had small platters for running Vitaphone discs.