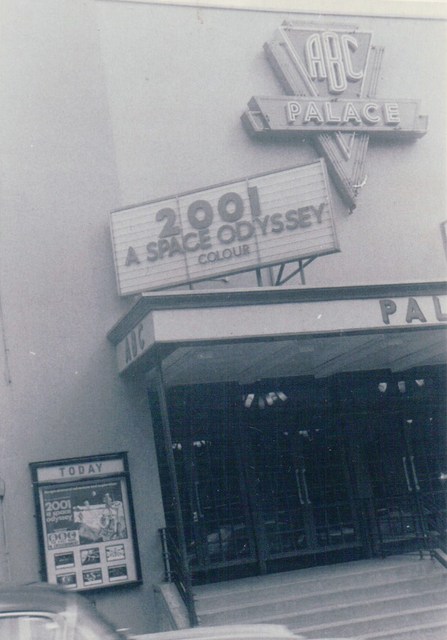 Here is the history of two buildings which came together as one, the location was on the east side of Chamberlayne Road Road near the intersection with Kilburn Lane at Kensal Green, in inner north west London:

The Acme Picture Theatre opened in October 1913 and was operated as an independent. In January 1914 it had new owners and the name was changed to Kings Picture Palace.

Designed by architects George D. Duckworth and Albert Howell, it was described as having an imitation stone front with a bold portico surmounted by a dome with flambeau. The auditorium seated 300 on one level.

In February 1931 a new company was formed;Palace Kensal Rise Ltd and work began on the construction of a new auditorium at the rear of the Kings Picture Palace. Designed in an Art Deco style, the architects were John Stanley Beard and A. Douglas Clare and the decorative work was carried out by W.R. Bennett. Seating was provided for 1,600 in stalls and balcony levels. When the new building was completed, the screen end of the Kings Picture Palace was removed and the two buildings were ‘joined together’.

Opened as the New Palace Cinema on 17th September 1931 with Lawrence Tibbett in “New Moon”. The former Kings Picture Palace had been converted into a very large foyer to the newly built auditorium. The former projection box became the managers office, where the proceedings going on in the foyer could be viewed by looking out of the old projection port holes.

From 19th February 1935 it was taken over by Associated British Cinemas Ltd (ABC) and the name shortened to Palace Cinema. ABC continued to operate it for the remainder of it’s cinematic life. It was re-named ABC in 1970 and was closed on 12th January 1974 with Eric Porter in “The Belstone Fox” and Chad Everett in “The Firechasers”.

The building was converted into a bingo hall but that didn’t take off and was soon closed. It then became a nightclub which closed in 1983. Eventually the entire building was demolished and by 1993 housing had been built on the site.

A vintage photograph from April 1969, of the ABC Palace Cinema. The original facade has been ‘modernised’:
View link

The photograph is of the premier (local) of 2001. The mayor and several local dignitaries attended and the event was covered by the Kilburn times. (Hence the photograph) The event won first prize in the ABC publicity competition, the manager (Wally Jones) won a new Ford Capri and was promoted to the new ABC that had opened in Falmouth. I was the projectionist at the time.

Your explanation of the cinemas evolution is almost “spot on” The foyer of the new ABC was the auditorium of the old cinema and still had projection portholes from what was now the manager’s office. The stained glass window (halfway up the circle staircase) was the loudspeaker gallery of the original that had its 1.37:1 screen laced directly onto the front wall. The entrance lobby was in turn the foyer of the old building. The entire original was “terraced into Chamberlain Rd and closely resembled the Gate (Notting Hill) The "new” cinema was built on spare land at the rear of the main road. Your one error was the original seating capacity which was around 300 and increased to 1600 when the new building opened.

I have the original opening brochure that gives details of everything including the cinema orchestra. Like most cinemas the stage was lost at the introduction of cinemascope. At the time of its closure it was one of only a few cinemas to still be running film on 2000ft reels. I also believe it was the only ABC to be heated by coke boilers. Although oil fired heating was installed on the reconstruction, it was removed at the outbreak of the Second World War.

The map at the top of the entry is incorrect. The cinema stood at the junction of Chamberlayne Rd and Kilburn Lane. The Google maps street view is correct (a picture of the houses that now replace the cinema)!