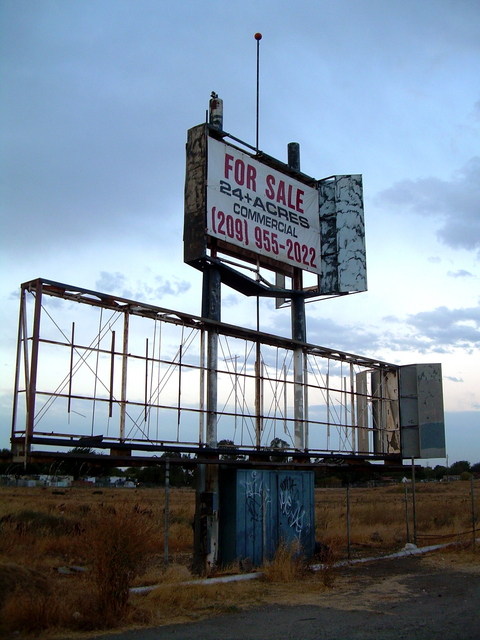 In 1955, the 99 East Drive-In was operated by United California Theatres out of San Francisco.

I went to this place all the time as a kid! My mum and her boyfriend (later my stepdad) went about two weekends a month, and almost always took me. That was way back when they still had the old speaker you had to put inside your car window! We’d often get take-out food (often from the Chicken Kitchen!) to go and eat in the car, before digging into delicious snacks we had brought for our ‘dessert/movie treats’. I remember when I was about 7 we saw a double feature of “Footloose” and “Breakin”!!!! I have such fond memories of this place. Even as a teen in the early 90’s I went a few times with my aunt and Uncle. I guess it shut down shortly after that. I know it became pretty ‘ghetto’, as of course all of Stockton did. I left that town just about the same time the drive-in did!

It just breaks my heart that drive-ins don’t exist anymore. They were so fun. So sad that kids of today have no idea what it was like. I’ll never understand why they don’t make a comeback. I guess because there aren’t many people who want to go sit in their car to watch movies when they could sit in an air-conditioned cinema to see all the new technology (like this new 3-D cr*p…remember JAWS 3? Now THAT was 3-D!) and pay WAY too much for concessions. Whatever.

Up until the mid to late 2000’s (I know it was still there in 2005) we still had a drive-in in Sacramento, I used to make my boyfriend at the time go with me. He didn’t seem to enjoy it as much as I did, but then again he was younger than me so he didn’t really go much as as kid like I did. I remember being really sad when I heard that one had shut down, for some reason I’m thinking it was the last one in Northern CA that had still been operating?

Oh, the memories. I wish they didn’t have to just be memories, but at least I have that.

The address above is the racetrack next door. Approx. address would be 3931 N. Wilson Way.

The concession building appears to still be on-site.

The site is now Stockton Flooring and Advanced Trailer Sales and Service.