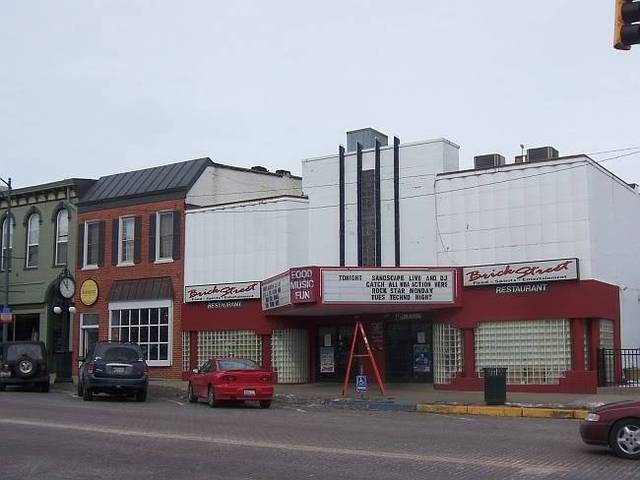 Here are two photos, from 1940 and 1960, respectively:
http://www.lib.muohio.edu/epub/recensio/movie.html
View link

I would love to know more about this theatre. It’s listed as closed, but sometimes that information is incorrect and the theatre is actually demolished…hope that is not the case as Oxford is the home of Miami University of Ohio and every small college town should have a downtown theatre, imo.

I love the b/w photos that “ken mc” posted on Feb. 12, 2006. Such a shame the Miami Western isn’t still a theatre in that Ohio college town.

I was in college there in the 60’s and uI remember seeing MARNIE, THE PINK PANTHER, BONNIE AND CLYDE,etc. The original neon marquee and signage was beautiful. The new makeover looks like junk.

This theatre was at one time owned by Jerry Steel, whose family continued to operate the Apollo Theatre in Oberlin, Ohio until just this February (2009), when it was gobbled up by Oberlin College:
/theaters/7736/

The Miami-Western Theatre opened on September 23, 1938, per a full-page ad for the theater in Miami University’s 1939 yearbook. The Streamline Modern auditorium featured murals depicting student life at Miami University on one side wall and at Western College for Women on the other. The house closed in 1988.

An ad for the F & Y Building Service in the October 27, 1938, issue of the Boone County Recorder (PDF here) of Burlington, Kentucky, on the occasion of the opening of the Gayety Theatre in nearby Erlanger, had a list of several theaters designed and built by F & Y since December, 1937, including the Miami-Western.

The most intense night of my life happened in the aftermath of having seen Clockwork Orange at the Miami-Western when the movie first came out. It was my fate to live-out the horrendous scene in which there came a knock on the door while rain was pounding down. The assailant was the (former) friend who I’d seen Clockwork Orange with, as I was baby-sitting an Oxford studio while the owner was in Europe. Trust me I’m not making this stuff up. Regardless of the gory details I miss the Miami-Western.. and it’s then-complimentary Talawanda.

Saw the movie Tin Men here back in 1987. The walls still had the murals then. Lived in Oxford when it shut down and reopened as a bar/club called First Run.

Sad that Oxford has no movie theaters now.