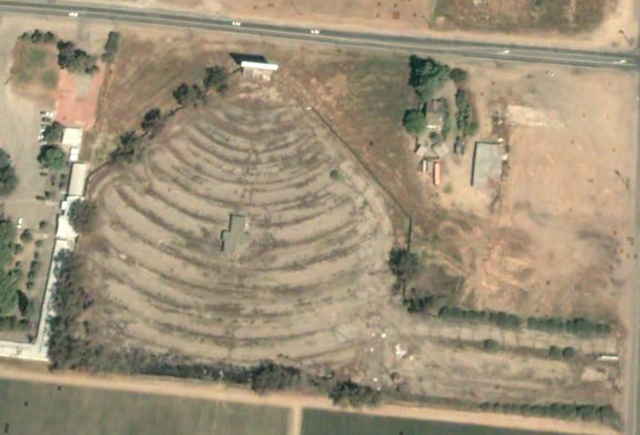 The Sunset Drive-In was opened on April 20, 1950 with Richard Widmark in “Slattery’s Hurricane” & James Ellison in “Hostile Country”. It was closed in 1983 and was demolished in 2004.

This was a Robert Lippert theater in the early 1960s. Capacity was 400 cars.

Here is an article from the Fresno Bee Republican dated 5/15/62:

Fire gutted the concrete block concession building at the Sunset Drive-In Theater at North Hughes and West Whites Bridge Avenues. The damage was estimated at $20,000 to $25,000. A passerby saw a column of smoke rising from the building shortly after noon yesterday and telephoned the Fresno Fire Department. Three units controlled the blaze in about 20 minutes.

Edward W. Stokes, the district manager for Electrovision, Inc., owners of the theater, estimated the loss. He said it includes foodstuffs valued at $2,000 and kitchen equipment worth $10,000. The theater projection equipment, housed in a room separated by a brick wall from the fire, was not damaged. Stokes said a new refreshment stand will be built immediately. The theater is expected to reopen tomorrow night without a food concession.

As a child in Fresno, I was in the back seat for movies at the Sunset. Back then, the price of admission was a scant one dollar per carload of movie-goers. The Sunset was famous for dusk till dawn movie marathons.

was demolished in 2004. so when did it close though?