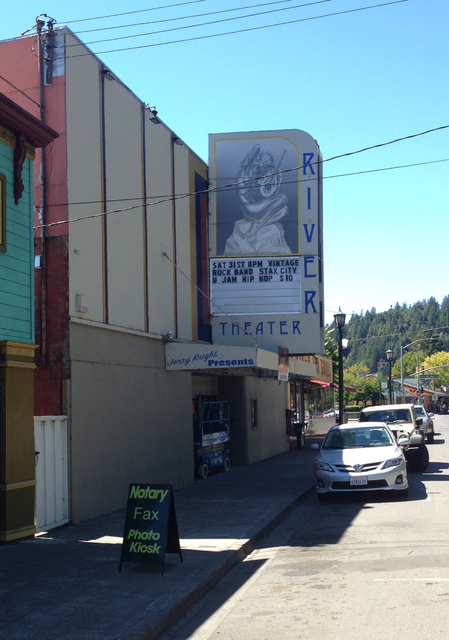 This theater was abandoned for years until it was converted to a live music venue in the 1990’s. The movie theater opened in 1947, and was screening classic movies and foreign movies from March 1975 until February 1978. The front of the theater has been completely remodeled, including the marquee.

My family owned/ran the place in the late sixties to early seventies. It was built in 1947 by Dave Williams and was operated by Dave and his wife Beverly for years. The seating at that time was 743 and remarkably, Guerneville had two theaters for about 20 years, the other, called the Grove was destroyed by fire.

This former cinema is about to be sold again back to the owners that had the place in the 1990’s and now have the surrounding properties. Looks like It’s days of movies or music are coming to a end when a new condo building with shops on the bottom try to take over this old fun movie spot on the river. Maybe things will change and the new owners will keep It as a movie or live event theatre for the locals and tourists to enjoy after It is fixed up or will It be torn down like so many movie theatres in California have been?