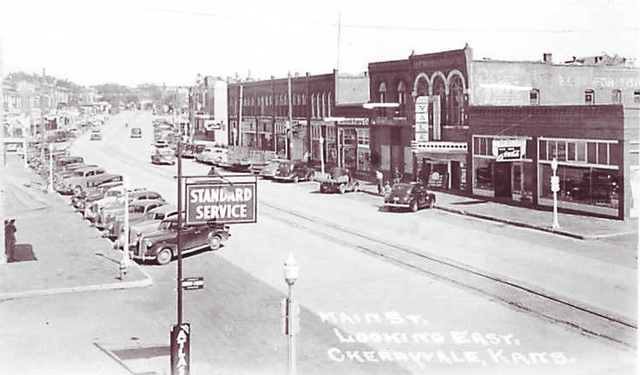 The Star Theatre was located on W. Main Street and opened in 1909. It was renamed Liberty Theatre on February 21, 1919. It became the Lee Theatre around 1930. In the 1940’s it was renamed Vale Theatre. According to the 1945 Film Daily Yearbook, it was open and could seat 300. The vale Theatre was closed June 17, 1947. Cherryvale is the birthplace of both silent screen star Louise Brooks and “I Love Lucy” co-star Vivian Vance.

Cherryvale’s big silent-era entertainment venues were its 19th Century Cherryvale Opera House for live entertainment and its photoplay houses, the Lyric Theatre (1908), the Gem Theatre (1908), and the 300-seat Star Theatre (1909) at 215 West Main. The Union Traction Company ran an interurban electric rail line between Parsons and Independence to Coffeyville and down to Nowata, Oklahoma. That line apparently brought business to these Cherryvale entertainment locations when it established a stop on Main Street in 1910 in downtown C'vale.

The Vale Theatre had started as the Star Theatre which as noted was launched in 1909, the town’s first venue designed expressly as a photoplay house. During World War I, on Feb. 21 1918, the Star was updated to remain competitive and became the Liberty Theatre – a common name for WWI era theaters.

As the 1920s were ending, Samuel A. Davidson purchased the Liberty knowing the town could likely support just one film venue in the transition to sound. The Liberty became that theater with the former Lyric turned Royal Theatre closing in 1929. R.O. Lee took on the Liberty changing it to the Lee Theatre.

Harry Musgrave opened the Ritz Theatre in the 1930s on south Neosho Street but it burned down in March of 1938 after very limited operation. The Lee Theatre was taken on by the Glen W. Dickenson Circuit. R.O. Lee stayed on for several years but when he left the managerial position during Dickenson’s run, the Lee changed to its final name of the Vale Theatre in the 1940s. A ceremonial final run of the interurban took place June 17, 1947. The Vale would also later vanish ending Cherryvale’s movie exhibition era.