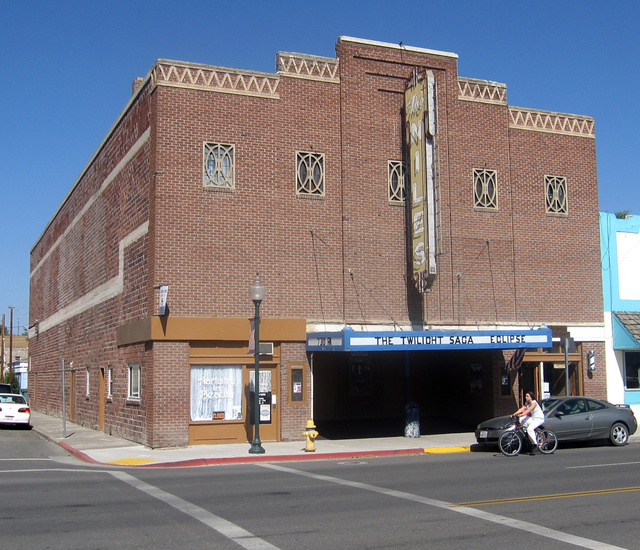 The Niles Theater opened on February 8, 1937, and had a seating capacity for 678. Today the theater shows first run movies and is also used for musical performances, live drama and community events. It is owned by the non-profit Alturas Community Theater.

The earliest mention of the Niles Theatre I’ve found in Boxoffice Magazine comes from the August 10, 1946, issue, which said that the house had reopened after a complete renovation.

However, the California Index has a card referencing the March 26, 1932, issue of Motion Picture Herald, saying that Edward Niles had taken over the Alhambra Theatre in Alturas. Unless Niles later built a new theater, then Alhambra must be an aka for this house.

An item about the recent reopening of the Niles Theatre after a five-month hiatus was published in the November 8, 1965, issue of Boxoffice. The item refers to the theater as being 28 years old, so that would give an opening date of about 1937.

Judging from the photos, the facade certainly looks like a 1930s Art Deco-influenced design. It’s hard to tell anything from the side wall, though. I don’t think I’ve ever seen bricks of quite that size and proportion in California before, and bricks that large usually don’t show up in pre-WWII buildings. That sort of brick must be peculiar to the Modoc Plateau, and might be almost any age. Those bands of concrete are odd, too. They might indicate a rebuilding, or they might not. It’s a puzzling building.

The two theaters being discussed here are not the same.

The Niles Theater opened in February 1937. It was a sort of gift to the town; J.E. Niles, a elderly local businessman, constructed it to lift residents' spirits stemming from the ongoing Great Depression. He was 85 years old when the curtain first went up.

The Alhambra, the town’s older theater, ceased operations upon completion of the newer Niles building. J.E. Niles also owned the Alhambra for a time (having purchased, along with son-in-law John Dolezal, the then-going concern in 1931), until his namesake theater opened on Main Street six years later. That older structure, located on South Howard Street, still exists; some recent uses include a roller rink (1980s) and carpet/flooring store (current).

This photograph of the Niles Theater was taken in 2010.

I had the pleasure of getting the grand tour of the Niles last summer. As stated, it is a community run theater, open weekends only and staffed by volunteers. The manager is part of the paid staff as well as the projectionist. They have been trying to raise money for a new projector, yet Mother Nature has had other plans. Diverting that money towards keeping the building in good condition, like a new roof. The community support though is outstanding and several service groups have helped in fundraising or donating materials. I was real pleased to see about 75 teenagers coming out of the doors after Snow White had ended. Sorta like a Norman Rockwell moment, a harkening back to carefree days. I’m not sure if they will be able to keep it open if they can’t convert. Keeping my fingers crossed and a hopeful return visit when they do.