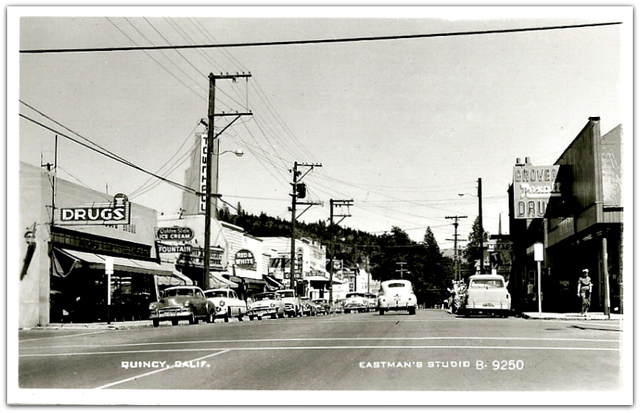 The original historic Town Hall and Quincey Theatre were destroyed by a fire on August 28, 1934. The replacement Town Hall Theatre was opened on August 7, 1936 with Wallace Beery in “Ah Wilderness!”. It had 375 seats. In 1948, it was remodeled by architect Herbert E. Goodpastor. It currently shows first run films as well as live music performances.

Quincy’s historic Town Hall was converted into a movie theater in 1936, according to an item in Motion Picture Herald of July 25 that year.

From the early 1950s a photo postcard view of Quincy along with the Townhall Theatre.

The Town Hall Theatre opened on August 7, 1936 with the film, “Ah Wilderness.” The local paper credits S. Charles Lee with the architectural plans. The site was home to the city’s Town Hall and the original Quincy Theatre which were decimated by a fire August 28, 1934 starting at the Grand Central Hotel.