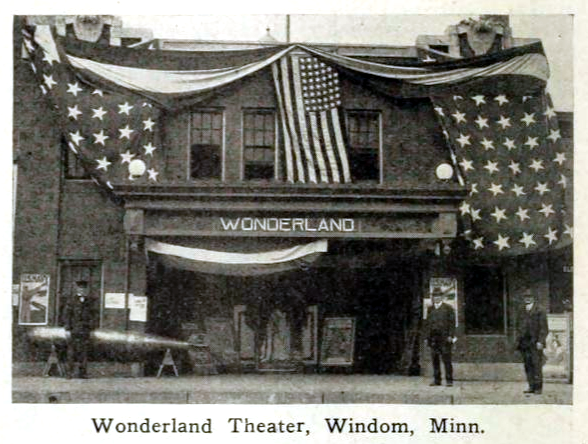 The Wonderland Theater was opened in 1914. It was renamed State Theater in 1937.

According to http://www.hardintheatres.com/ht/movieList.do?theatreId=12 The theatre is now closed.

Chuck: Where are you finding that? What I have found says it closed in December 2011.

Recently read an article republished on TwinCities.com that talks about fundraising efforts to purchase a digital projector for the State Theater. Apparently a non profit was formed to save the theater and has been showing films, unfortunately the digital transition is coming faster than they hoped. Looks like they were told celluloid prints would no longer be available after March or April 2013. I wish them the best of luck.

Film prints will be available longer than that. They should attempt to get community support for fund raising. If the owners need a manager I’m available.

At the site now. Though the marquee is newly gone (revealing a hodgepodge facade beneath), there’s a movie advertised for tonight, a young man is chalking up upcoming attractions, and there’s an announcement for a “1st anniversary” show in September. This one is definitely still open.

WINDOM, MINN. – For eight months, it sat empty. No blockbusters, no popcorn, no Saturday matinees. In the movie industry’s massive switch from film to digital, it looked like the little State Theater was yet another casualty. But then residents came to its rescue. This month, its classic, red marquee will rise again. People in small cities across Minnesota are rallying around their Main Street movie theaters, helping them pay for the pricey new digital projectors needed as 35-millimeter film is phased out. Sick of seeing businesses shutter their downtown storefronts, they’re writing checks, throwing fundraising galas and convincing city councils to chip in.

The State Theater, now a nonprofit, switched out its whirring projector for a digital behemoth in May. The Historic Comet Theater in Cook, Minn., raised $81,000 for new gear via the Kickstarter fundraising website. This weekend in Luverne, Minn., volunteers hosted a speakeasy-style party, with classic cars and live music, to help pay for the Palace Theatre’s upgrade.

“If people are going to want to move back to small-town, rural Minnesota, there’s gotta be a reason to come back,” said Dianne Ossenfort, president of the Palace’s board. “And a downtown theater is one of the reasons.”

As film gets more difficult to find, movie lovers have worried most about small-town theaters. The expense of buying a new digital projector — plus upping ventilation and retrofitting a booth — often exceeds $60,000. That’s a big figure for a single-screen theater, some of which are open only on weekends. A year ago, industry groups predicted that thousands of theaters would close rather than convert. Some have. But many little theaters are provoking passion. Across the country, residents are helping pay for the digital equipment, via county grants and online fundraising.

“In a lot of cases, it’s the only entertainment for miles around,” said Patrick Corcoran, vice president of the National Association of Theatre Owners.

The movie industry’s conversion has no hard deadline, but film versions of the latest flicks will be tough to procure by the end of the year. So far, about 75 percent of theaters nationwide have made the switch, Corcoran said. Drive-ins are lagging — about half have yet to switch. Many might be waiting until this season’s end, he said.

“It’s an enormous changeover of the industry in a very short period of time,” Corcoran said.

The State Theater’s marquee sits in 19 pieces, dusty and dented, on the floor of a construction shop in Windom. But volunteers hope it will be welded, painted and mounted by late September — just in time for an anniversary party. A year ago, residents in this southwestern city of 4,600 formed a nonprofit, raised $13,000 and bought the State through a contract-for-deed. Then they cleaned. Friends brought brooms, buckets and bleach.

“We scraped up gum that had two coats of paint on it,” said Buckwheat Johnson, president of Windom Theater Inc. “Two different colors!”

Their little theater up and running, the volunteers then began raising money again — this time for a digital projector. Thanks to a couple of big checks, one from a woman who grew up going to the theater, they brought in $20,000. The county contributed a low-interest loan. Then a guy called: He had a used digital projector, much cheaper than new.

“Our theater is looking good and running good,” Jean Fast, secretary of the nonprofit, said with pride.

The movies themselves look better — sharp and clear, showing after showing. They sound better, too, thanks to new so-called surround sound. Plus, now the film doesn’t start on fire, as “Kung Fu Panda” once did. Johnson used to get those calls.

Website is dead. New one appears to be: https://sites.google.com/view/windomstatetheater, and of course it has a FB page. The marquee is back up, looking less like it got thrown down a flight of stairs. Anyone know why the entire center of the façade is such a mess? Looks like it happened many years ago.