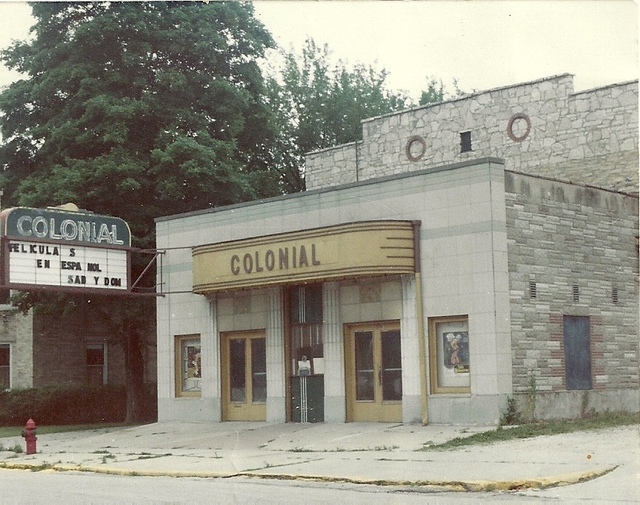 Opened as the Royal Theatre in the fall of 1910, presenting vaudeville and live shows. By early-1929 it became a movie theatre. Sound was installed in early-1930 and it was renamed Rio Theatre on October 26, 1932. It was re-named Colonial Theatre in May 1937.

Closed in 1979, it reopened in 1981 only to close for good in 1985. Prior to its demolition, the Art Deco-style wall fixtures from its auditorium were salvaged and restored and today are in the main auditorium of the Art Deco Lake Theatre in Oak Park, IL.

I grew up in Marengo and spent many hours in the Colonial run by Mr. Clark. Was very sad to see it go. It’s address would be a few numbers lower then the church as it was closer to downtown. I have pics of its demolition.

also have a pic of it before its destruction

UPDATE: The Colonial Theatre In Marengo Open Its Doors As The ROYAL Theatre In The Fall Of 1910 With An Unknown Program, Including Local Events, Concerts, Performances, And Vaudevilles. As Of 1920, It Is Owned And Operated By H.F. Wilson. By Early 1929, The Royal Theatre Became A Movie House And Started To Screen Movies As Second-Run Silent Films. In Early 1930, Sound Was Installed At The Royal Theatre, And Started Screening Talkies (Sound).

The Colonial Theatre Continued Its Operation As A First-Run Film Until The Spring Of 1979, Then It Begins Showing Spanish Language Films (Owned and Operated By David Ames) For A Short Period Of Time Because Of A Protest Against School Kids.

The Protest Started On September 30th, 1979 At Around The Afternoon Hours, When 30 School Kids Marched Around In Front Of The Theater And Went Up And Down On State Street For An Entire Hour, As They Picket And Protest Against The Colonial Theatre, Holding Signs Saying That They Want English (First-Run) Films Again. David Ames, The Owner Refused To Make A Comment On The Demonstration. He Said, “The Reporter Who Attempted To Get His Side Of The Story Was Trespassing And Ordered Her Off My Property.” According To The Marengo Republican-News, The Colonial Theatre Only Closed On Weekdays, And Only Opened On Weekends. People Said That The Children Had “No Place For Entertainment.”

The Theater Ended Up Shutting Its Doors For The Final Time In Late 1979 Because Of The Protest.

Weeks Later On October 18th, 1979, Attorney Loren Golden Appeared On Behalf Of The Owner Of The Colonial Theatre, David Ames, In Connection With His Request For A Permit To Erect A Fence On His Property. Ames Registered Over Several Police Departments In Across McHenry County About Trucks Using His Driveway To Reach The Rear Door of A Business Establishment.

Prior To The Closing In 85, The City Of Marengo Almost Took Ownership Of The Colonial Theatre In May Of 1984 After Special Meetings Were Held At The City.

David Ames Though Ever Since Took Ownership In August 1978 Pretty Much Had A Hard Time In His Life… Shortly Right After The Reopening Of The Theater In 1981, Owner David Ames Was Under A Vehicle Accident After Trying To Park His Car. The Owners Later Removed The 2 People Including Ames At The Request Of Police, Before Another Call Was Rushed From The Marengo Police, As Was Later Responded To The 300 Block Of East Grant To A Domestic Disturbance Call. On September 12th, 1984, David Is Marked Under The D.H.I.A..