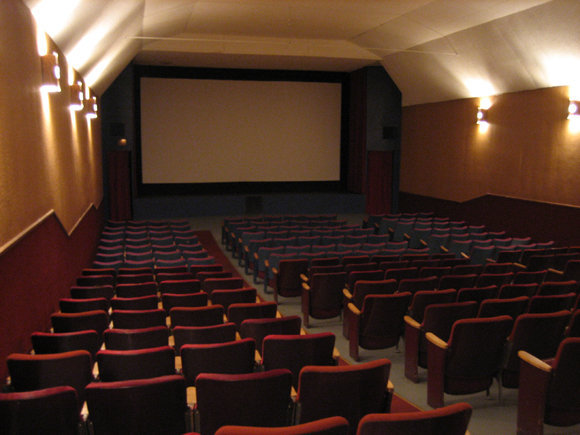 The Ituna Theatre was built in 1947 and has been operating ever since that time. The theatre recently changed ownership, and the new owners have begun to make gradual improvements to the theatre’s services, with the goal of restoring the theatre over time.

The theatre was upgraded a couple of years ago with xenon projection and Dolby surround sound.

The Ituna Theatre was sold in 2005 by the original owners to new owners. The new owners refurbished the concession and projection equipment from the original equipment that was still in operation. The new equipment included xenon projection, Dolby surround sound, a small digital projector for showing games and presentations on the screen, and a new “old fashioned” candy counter. The new owners also eventually replaced the theatre marquee with an upgraded style and new logo. The also continued to use the original neon “THEATRE” sign.

The theatre reopened under new ownership with the movie “Chicken Little.” The theatre had previously been running on a reduced movie schedule (three days per week) but the new owners eventually increased the play schedule to five days per week (Thursday – Monday). From 2005-2010, the Ituna Theatre saw a dramatic increase in attendance and revenue and also hosted a number of events including concerts, holiday parties, make-your-own-movie festivals, summer fests with town-based scavenger hunts, and private events such as birthday parties. People also enjoyed the great variety of speciality candies, tea, and roasted nuts, for which the theatre became known. In addition, the cast-iron kettle popcorn from the theatre was very popular for miles around. One man came into the theatre one day and said, “I just drove 60 miles for this popcorn!”

In 2010, the new owners had to move out of province and decided to sell the theatre. It was a good time to sell because revenues were at a peak, and the theatre was very popular. When no buyer initially stepped up, the owners attempted to make an arrangements with the local town authority to turn it into a community-run theatre, as so many other small-town theatres in Saskatchewan had become. The discussions were taking a long time, and, unfortunately, the theatre had to be closed. The theatre showed its final movie, “Shrek 4,” on the July 1st weekend in 2010 and was closed.

Over the summer, 2010, an offer was made to purchase the theatre for the same price as had been asked of the local town in order to turn it into a community theatre. The owners of the theatre decided to sell it to the new, private owners at the discounted price in the interests of keeping the theatre open and the business running. The new owners (now the third set of owners for the theatre) renovated the concession and entrance way to the theatre with paint, redid the carpets, and upgraded the bathrooms. They also made other changes to the theatre, in terms of concession offerings. As of Spring 2011,the theatre continues to show films but on a reduced schedule (usually Thursday – Saturday), and the new owners also have hosted a folk-singer concert.

The address of the Ituna Theatre is 407 Main Street, Ituna, SK