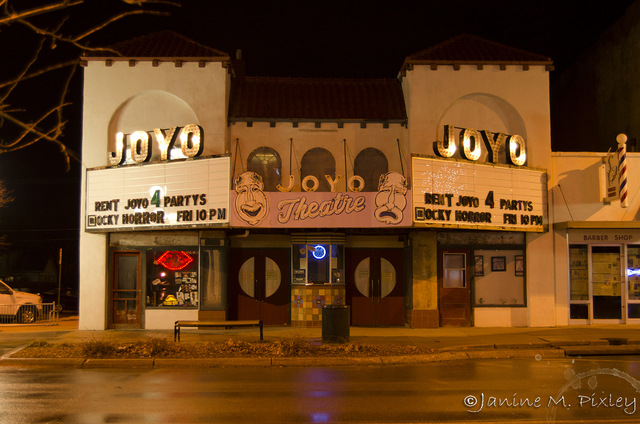 The New Lyric Theatre opened February 17, 1928 with Marie Prevost in “The Rush Hour”. On August 5, 1936 it was briefly renamed Former Lyric Theatre. It was renamed Havelock Theatre and closed on November 28, 1936 to be refurbished. The former Joyo Theatre across the street (which has its own page on Cinema Treasures) was closed on January 18, 1937 as the former Havelock theatre reopened as the Joyo Theatre on January 20, 1937 with Robert Cummings in “Three Cheers for Love”.

Local residents Dwight Carter, Jim Salber, Kendra Oliver, Dave Oliver, and Ron Sanders all volunteer their time to restore the Joyo Theatre to its former glory. The group was able to save many of the theatre’s original seats, which, despite their age, are still able to recline.

The independent film “The Truth About Tully” filmed five scenes at the Joyo Theatre. Although only two were used in the final cut of the film, it was still great for those that know the Joyo Theatre to see such a familiar sight on the silver screen. Several student films have also used the Joyo Theatre as a location.

Here is another photo:
http://tinyurl.com/ykeqvnk

This article from the Daily Nebraskan says that the Joyo Theatre was built in 1926.

It had a predecessor, though, as there was a movie house called the Joyo Theatre operating in Lincoln (or Havelock, as the neighborhood appears to have been independent of Lincoln at one time) as far back as 1908, when it was mentioned in multiple issues of The Billboard and once in Variety. It was also mentioned twice in The Moving Picture World in 1916.

The Joyo Theatre in Havelock was also mentioned in The Film Daily in 1927 and 1935. I’ve also found mentions of houses called the Joyo in Fairfield (1938) and Coleridge (1957), Nebraska, but haven’t found any details about either of them.

There might have been three houses called the Joyo Theatre in this neighborhood. A document pertaining to the establishment of a Historic Preservation District says that the original Joyo Theatre opened around 1912 in a building at 6121 Havelock Avenue. If that’s the case, then the Joyo mentioned in the 1908 Billboard items must have been an even earlier house.

I’ve also found a house called the Havelock Theatre, operated by Bob Wintersteen, mentioned in The Film Daily of September 10, 1936. I don’t know if this is yet another theater or an aka for the Lyric. A December 15 Film Daily item says that the Havelock had been bought from Wintersteen by C. Fraser, operator of the Joyo Theatre, so this purchase might have led to the newer house being renamed the Joyo, assuming that it had originally been the Lyric, which does seem likely.

When was the picture of the Joyo taken? My husband’s dad owned the Joyo for many years. The picture you are showing seems to be one from when he owned it and my husband did the outside renovation.

The New Lyric Theatre launched on February 17, 1928 with Marie Provost in “The Rush Hour.” It became the Former Lyric Theatre (true!) on August 5, 1936 for three weeks when veteran Havelock theatre owner Robert E. Wintersteen took on the venue on July 21, 1936. He staged a naming contest as Former Lyric Theatre just seemed odd.

The winner of the contest was Mrs. Robert Sterkle who suggested the (New) Havelock Theatre. She won tickets for two for an entire year. Second place winner, Edith Cassady, chose the Ballard Theatre for which she won a 17-pound Morrill’s Prize Ham. Third place winner Mrs. Otto Bloom’s entry of Shoptown Theatre receiving a 48-pound of flour (brand unknown at this time). And fourth prize went to Mrs. Art Anderson who suggested the North Side Theatre who got a case of canned goods (again, exact items are unknown at this time).

“Slim” Frasier of the Joyo Theatre across the street had seen enough. He came up with a business proposal essentially to merge the two theatres on November 28, 1936. He immediately closed the former Lyric turned Former Lyric turned Havelock Theatre and did a major refresh at the Havelock including adding a cry room, improving ventilation and likely moving his sound system from the old Joyo to the new Joyo.

The soon-to-be-former Joyo Theatre location closed permanently on January 18, 1937 with “Satan Met a Lady.” Slim reopened in the newer-build “new” Joyo Theatre on January 20, 1937 with “Three Cheers for Love.” Frasier then equipped the theatre for CinemaScope on February 12, 1954 with “The Robe.”

The venue still was around in the 2020s.