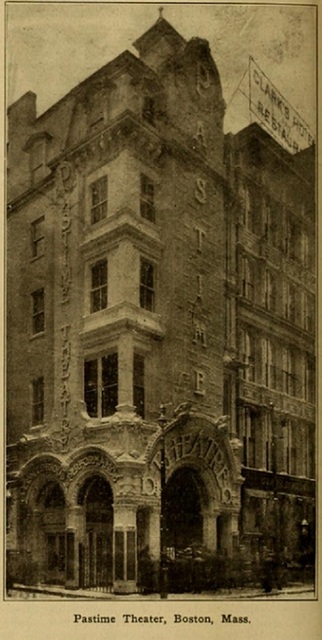 The Pastime Theatre opened on February 1, 1908. In the words of the next day’s Boston Globe:

“The new Pastime theatre, which was opened yesterday by the American automatic amusement company, presents one of the most conspicuous and elaborate playhouse fronts on Washington st. Located at the corner of Avery st., in the heart of the shopping district, the new towerlike design of the building, with its high arch and pillars, makes the theatre a prominent object in the busy thoroughfare. At night hundreds of electric lights give an effect of great brilliance.

“At this theatre 10 cents admits to everything to be seen and entitles the visitor to a comfortable opera chair. The show takes place altogether upon the stage, and is largely made up of a pictorial portrayal of comic, dramatic and historic scenes and representations by the most up-to-date methods of places of greatest interest which people at liberty to travel go far to see.

“The architects of the new amusement house are Clarence H. Blackall and Frank Chouteau Brown. Mr. Blackall was the architect of the Colonial theatre and is now engaged in the designing of the new Park-sq theatre. In his studies abroad in connection with the last named project he became convinced that the Germans are in the lead in ideas and methods of theatre construction and design, and he has introduced the German nouveau style in the treatment of the Pastime theatre…

“The exterior front of the building is all of cement and is of a character so novel and impressive as to be certain to catch the eye of every passer-by. The first story comprises a high and graceful arch, supported by massive columns. The design of the upper stories gives the building the appearance of a tower. The cement is of a light color and lighted up at night about 2500 electric lamps, many of which are used in displaying the name of the theatre in dazzling letters.”

The Pastime did not last very long. The last notice of a show that I could find in the Globe archives was in February, 1914. Two months later, another article lists it among buildings that are being auctioned, and must be moved, so that Avery Street can be widened.

In his Boston theaters history book, Don King also mentions that the Pastime Th. opened in February 1908, but has nothing more to say about it. It is not listed in Joe Cifre’s essay “Saga of the Movie Industry in Boston”, but I don’t think his summary of early Boston cinemas was meant to be comprehensive. Charles Grandgent, in his 1932 essay, “The Stage in Boston in the Last Fifty Years” says that the Pastime was on Washington Street, “over the old Clark’s Hotel”, but the Boston Globe description above seems to imply that the Pastime was of new construction. At that time Avery Street was little more than an alley and it did not go through to Tremont Street at its west end as it does today. So it was widened, and the comment above that the Pastime was in the way of the widening construction makes sense.

This is a puzzle. 581 Washington st was on the north corner of Avery st, adjacent to the Clark’s Hotel, as mentioned above, and owned by Abraham Shuman. However, it was the other side of Avery st that was torn down when Avery st was widened. This is where the Avery hotel was then built. The name Pastime doesn’t show up on the maps, so they would have been leasing space. http://i1080.photobucket.com/albums/j324/MarkBul/pastime1908.jpg