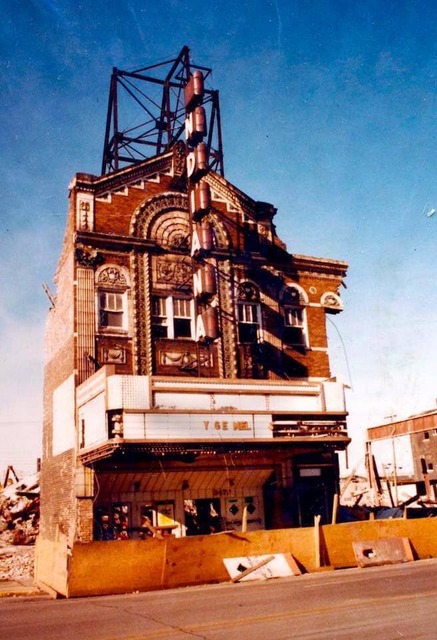 In the mid-1960’s it went over to screening Spanish language films and was reanamed Teatro Indiana. The Indiana Theatre was closed around 1973 after several years as a (soft core) adult theatre. The organ (still playable) was taken out and installed in the Tivoli Theatre, Downers Grove, IL. The theatre became a church and was later demolished.

This theatre opened in late December of 1924, and was always the finest presentation of vaudeville and film; the bill changing as often as 5 times a week. The East Chicago Public Library has a box of photos, the opening day program and just about every advertisment that was used in the “glory days”. I was associated with the Indiana from 1966 until it closed in 1973 (I believe) by working on the organ (a 3 manual 10 rank WurliTzer “H” special), restoring the lighting and making other repairs. John Muri was organist there from 1927 until 1935. It was a “porno” house all the years I was there, but not your ordinary porno house. The domes, coves, borders, foot lights and organ grills were kept lamped in 3 colors and were used for every show. The curtains would open as the film started and close over the credits. Fresh popcorn, friendly staff and a double feature! The biggest crowd I ever saw there was on Mother’s Day (of all things) in the late 60’s – this was soft-core stuff and the place to take a date, believe it or not. The WurliTzer would serinade on Saturday nights before the show until the last year of operation. I remember a sign in the lobby BALCONY OPEN FOR COUPLES ONLY. The building finished its life as a church of all things and was demolished in about 1985. The Hooser in Whiting is nearly identical but is maybe 30 feet shorter; the balcony in each had 2 rows of seats and a wide pramanade.

I have large photos of the opening but I don’t know how to submit them. Theatre Historical Society has them too. The WurliTzer organ lives on in very good condition in the Tivoli theatre in Downers Grove, Il. and is played before and between the shows on weekends.

At eleven-thirty o'clock tonite the curtain will rise on an event of community wide interest â€" the midnite reopening preview performance of the Neva Indiana Theatre. The reopening follows a week of supreme achievement with scores of skilled craftsmen redecorating the theatre â€" and with the country’s foremost engineers installing the New Miracle of the Talkies â€" Western Electric Wide Range Sound Reproduction. This is the only theatre in Northern Indiana with this latest sound improvement which reproduces every sound in its natural tone. The opening program which will be presented at both the midnite premiere tonite and all day tomorrow Sunday offers several
hours of complete enjoyment. Milt Herth, popular local and Chicago organist who has gained wide acclaim for many years in this territory, will preside at the Grand Wurlitzer Console. He has
prepared a special selection of hit songs which promises to keep the city humming for weeks to come.
Probably the year’s most tuneful musical comedy has been selected as the main screen feature for the occasion â€" “In Caliente.” This production heralds the return to pictures by Dolores Del Rio. Pat
O'Brien, Glenda Farrell, Edward Everett Horton all add to the glamor, melody and comedy of this hit picture. The Da Marcos, sensational dancers until recently featured at the Palmer House in Chicago, execute a number of applause provoking specialties. Walt Disney, creator of “Three Little Pigs,” offers his latest and finest achievement, an all technicolor cartoon â€" Mickey Mouse in “The Band Wagon."
Other interesting subjects and the latest News Events round out an opening program which will be a fitting tribute to the reopening of the theatre which is destined to be the pride of the Calumet region.
The New Indiana offers a new policy providing a long felt need in East Chicago â€” Matinee performances every day of the week running continuously from one to eleven-thirty o'clock. In spite of the fact that many thousands of dollars have been put into the improvements,
the New Indiana announces that there will be NO ADVANCE IN ITS POPULAR LOW ADMISSION SCALE. Matinees Monday to Saturday to 6:30 p.m.
20c, after 6:30 p.m. 25c; Sundays and Holidays the seats will be 20c till 3 p.m. and 25c after 3 p.m. Admission to children at all times will be 10c.
The opening week is replete with splendid programs. On Monday and Tuesday Joe E. Brown will appear in Ring Lardner’s sidesplitting comedy, “Alibi Ike.” The regular Monday evening Bank Nite Award will be held on the stage of the theatre. On Wednesday Karloff appears in Edgar Allen Poe’s weird narrative, “The Raven.” On the same program the patrons will enjoy the fifth elimination contest to select Miss East Chicago. This presentation will take place on the stage at 8:30 p.m. On Thursday, Friday and Saturday, the screen’s most glamorous stars, Joan Crawford and Robert Montgomery, will appear in the stage and screen success, “No More Ladies.”
It is the sincere wish of the Lake County Times that the New Indiana Theatre prosper and continue to be one of the finest institutions of entertainment in the Calumet district.

WHEREAS: It has been brought to my attention that the remodeled and newly decorated INDIANA THEATRE is about to reopen its doors.
AND WHEREAS: The management of that institution has seen fit to go to the extreme in its efforts to give to the people of our city something more than just a theatre â€" but a breathing, living
symbol of its confidence in our support.
AND WHEREAS: I am officially assured that we will continue to be favored with especially fine programs â€" embellished with the “New Miracle of the Talkies â€” Western Electric Wide Range Sound Reproduction.
THEREFORE, I, as Chief Executive of the city of East Chicago, on behalf of the new Indiana Theatre, do hereby request the cognizance of each and every citizen of our community in the praiseworthy
project of this institution.
ANDREW ROONEY, Mayor

The East Chicago library (the new branch on the east end of town, on Chicago Ave. I think) has boxes containing just about every attraction to ever play this theatre, including an opening day program. Gloria Dosen was curator, and a great “fan” of the Indiana Theatre, but I haven’t been there in maybe 10 years and she may not still be there. This is the second theatre I truely loved. Gary Rickert

This opened on February 11th, 1925. Grand opening ad in the photo section and below

It Became The Indiana Theatre On August 18, 1935 With Pat O'Brien’s “In Caliente”, Along With A Disney Cartoon: Mickey Mouse In “The Band Concert”, And A Performance By The De-Marcos.