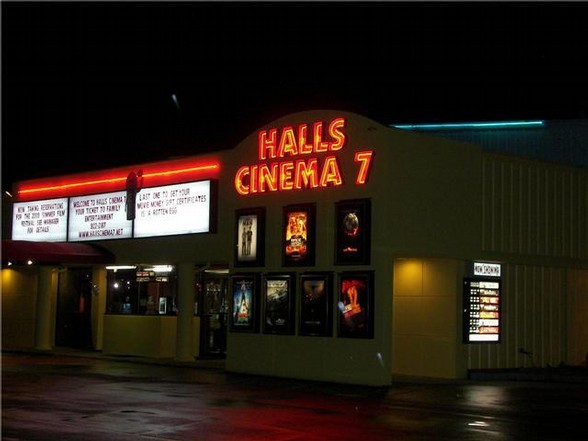 In the Knoxville News-Sentinal Wednesday November 8, 2006, section “C” is a short article about this theatre closing due to competition from the big chains, cost of upgrading to digital and declining income. It does mention the address 3800 Neal Road as the site and that the 1 acre parcel would probably be converted into other commercial uses.

The article mentions that the “theatre opened in 1983, was renovated twice and had three screens added in the 1990’s…”

The theatre reportedly closed on October 23, 2006.

How many screens did the theatre initially have?

The theater had 4 screens.

It also had stadium seating. I’m sorry to hear it is closed.

this theatre has been reopened for some time. the website is:
http://hallscinema7.net/

The Halls Cinema originally opened April 21, 1983 with four screens. Three additional screens were added in May of 1989. The theatre is still in operation under independent ownership.

Theater 5 is equipped to show 3D.