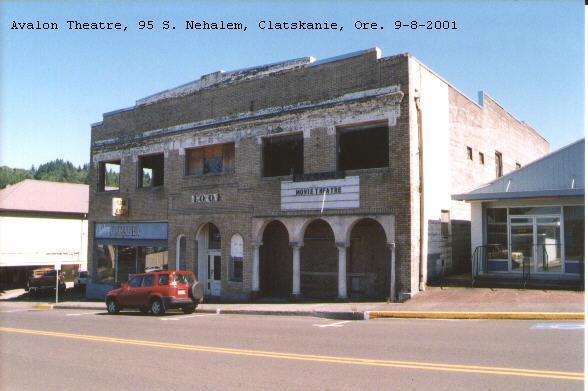 This small town theater is located in an old Odd Fellows Hall which opened in 1926. The Avalon Theater operated from 1930 until 1985.

Following renovations in the early-2020.s it reopened as a cultural center renamed Birkenfeld Theatre. The building is listed on the National Register of Historic Places.

I saw and photographed this theatre last week. It still looks the same as in the above photo. Some of the letters on the reader board reading “Movie Theatre” have now fallen off, and the second floor windows seem to have been filled with some king of casing and sash.

I used to live in Clatskanie. I remember seeing Tron at this theater back in ‘82. That was also during the video game craze of the early '80’s. We’d show up a couple hours before the movie starting time and the owner would welcome us in to the lobby to start dropping our quarters in about 6 or 7 bootlegged video games there. I remember the really bad Donkey Kong and Scramble clones he had.

Jan.7,1949 had “MAN-EATER OF KUMAON"playing with Sabu.They ran three different pictures or so each week during the thirties and forties.

Anyone have any updates on this building? Is it still standing?Has anyone done anything with it? Does anyone have pictures of this theater when it was operating? Interior pix would be nice, too.

While on a trip out to Astoria, I stopped by here and found that, yes it is still standing and happens to be under restoration. The city owns the building and has raised over 3 million in grants to turn it into a multi-use facility. The original auditorium will be used for live performing arts. There is a ballroom upstairs that can be used for wedding receptions etc. The rest of the space will be offices & bathrooms.

It looks like most of the framing is already done and an elevator has been installed. The target opening date is summer of 2015 as they already have dates booked in August.

This is indeed very good news! Glad to hear this gem is being brought back to life. :)

I used to run cameras in this old theatre when my family ran it during 1980s.we were the last to operate this theatre.we showed many movies as well as auctions and tool sales in this bueatiful old building.movies were watched in the auditorium of the building and cameras were upstairs next to ballroom.entry to camera room was through small door upstairs.there were 2 cameras in the room.they were reel to reel arc projectors from the early 1930’s or40’s.ran many movies here like Short Circuit,Trim and many others.can someone let me know if the cameras are still installed upstairs of this theatre.

At some point, architect Day Walter Hilborn provided plans for remodeling the Avalon Theatre, but his records don’t give the date of the project.

It is now operating under the banner of the Birkenfeld Theatre of the Clatskanie Cultural Centre.