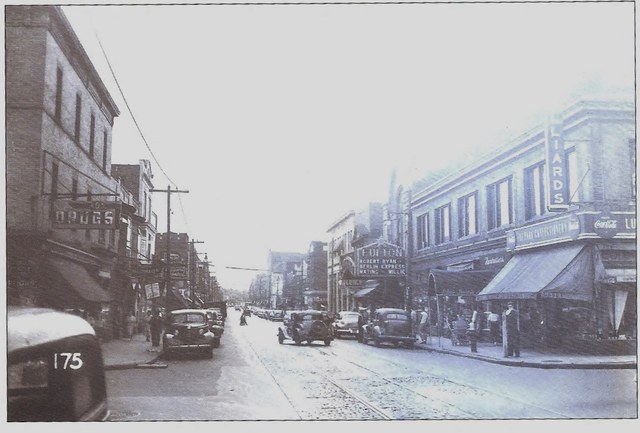 The Fulton Theatre opened March 7, 1922 with Richard Talmadge in “The Unknown” and Florence Vidor in “Hail the Woman” plus a Buster Keaton comedy. It was equipped with a Seeburg organ. Listed in the 1943 Film Daily Yearbook as part of the Skouras Theatres Corp. chain, the 1951 FDY and the 1961 FDY (as part of the Snaper Circuit). The address at the time was 125 Jackson Avenue.

This theater was closed in 1962 and demolished several years later.I remember going there on Saturday afternoons to see kiddie shows with 21 cartoons. Later the management resorted to showing three films for the price of one, showing mostly horror films. The crowds were big but a bad element started coming to the theater and the police had to be called a number of times to restore order. A later new management took over and tried to re-establish it as a traditonal movie house. Business was not good and the theater had to close.The theater had an attractive marquee that when lite would lite up an entire square block bringing life to the neighborhood. There were about 1000 seats in the ochestra and around 700 in the balcony. Only second run films were shown making it difficult for this theater to compete with the larger movie palaces located on Journal Square in Jersey City NJ. I worked there as an usher for about 2 years in my teen years. It was fun.

I lived one short block from this theatre when I was a kid. I remember it when it was abandoned and when it was razed. Does anyone have any photos of theatre? Interior or exterior?

i remember people being thrown off the balcony

This opened on March 7th, 1922. Many grand opening ads in the photo section.

I would give my eye teeth to see interior photos of this theatre.