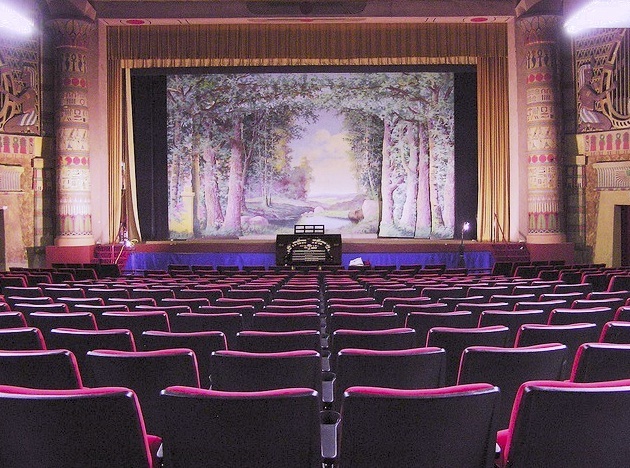 Until 1944 the town was named Marshfield. With beautiful Egyptian architecture throughout, this theatre was a real wonder to behold.

Built by Harry C. Noble in 1922 as the large Motor Inn Garage and Service Station. Harry C. Noble hired architect Lee Arden Thomas to convert it into the 1,274-seat Egyptian Theatre which opened in November 1925 with Norma Talmadge in “Graustark”. The interior decorations were by B.F. Shearer & Company of Seattle, who were working with Carl Berg, an expert in Egyptian design. The classic Egyptian Theatre still has its original 10-rank Wurlitzer Hope-Jones Unit Orchestra organ which was opened by organist Rex Stratton. The theatre still retains all of its original vaudeville backdrops and working stage.

The balcony was divided into two seperate auditoriums on May 12, 1976, but the main auditorium remained much the same way it has always been with the exception of new seats and speakers.

Each year they had a Christmas pipe organ concert along with a brass band on stage. The concert was incredibly popular.

In late-November 2005, after 80 years, the Egyptian Theatre showed its last film. There was talk of a legitimate theater company taking over the building, but nothing happened.

In 2007, the Egyptian Theatre reopened for movies, screening films more than five years old. They are projected via a Sony digital projector and the restoration work on the building continues. It was closed suddenly in March 2011, when the city authorities discovered structural problems. Repairs were carried out and the Egyptian Theatre re-opened June 20, 2014.

Last week the EPTA held another successful fund-raising event, on their way toward the $200K match to grant money for the $750K goal needed to complete the structural repairs and get the Egyptian back opened for business by 2014. This theatre is in good hands and will come back better than ever. Worth the wait!

Is it open for business yet?

According to the website, grand re-opening is scheduled for Friday, June 20.

Finally made a visit to see ‘Halloween’ on Halloween night. I think the only other move I saw here was The Fugitive in 1993 on the main screen. Real happy to see the end result after years of fund raising and repairs, and they still have a few more projects to finish. But at least they are open for business again and can bring in some money.

Overall, I would give the decor an A+, it looks like a grand movie palace once again.

But as a film venue, and this is not the only means of entertainment here anymore. I would give it a C grade. Unfortunately, the last operator to run this theater placed a restriction on movies in order to have the Egyptian not compete with his other multi-plex in town. So they are left to p[ay the retro card, which is not a bad thing. However, the movies are projected off a DVD. Which means the film image does not take up the whole screen, the audio kept dropping out every now and then. And the disc paused for about a minute, which maybe was an overall indication of the quality presentation. Plus, since Halloween was filmed with very little light sources in some scenes, those shots were dimmer compared to a newer Digital projector. I hope I’m not being too not picky, just wanted to be fair in my critique. I’m still looking forward to coming back for a concert someday.

Beautiful proscenium and all else. Nicer than the Egyptian in Los Angeles. That has been ruined and only the ceiling is original and elaborate. Coos Bay is lucky to have this gem.

I added three 30's -40’s photos of the Egyptian sign that spanned the street. Still searching for other info on it. And whether Broadway was originally Main Street. I will delete the photos if it turns out it was for another business called The Egyptian in Coos Bay.

These are all of the Egyptian. A version of this sign will be installed as part of the canopy and marquee project. Can’t put anything across the street.