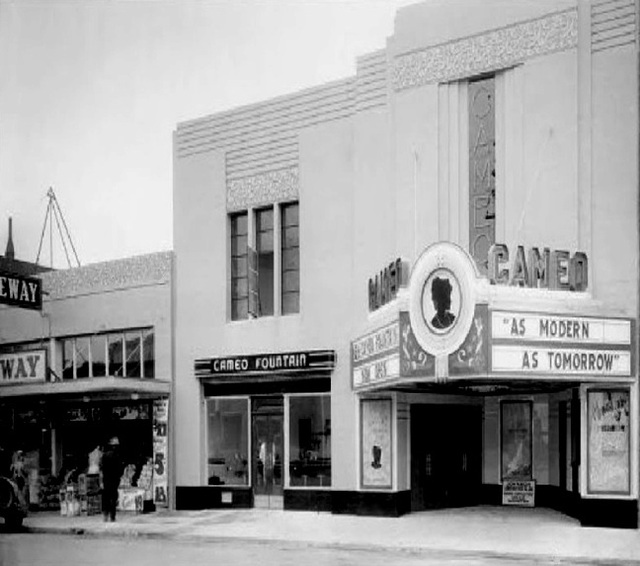 The 490-seat Cameo Theatre was opened on August 20, 1937 with Marion Davies in “Ever Since Eve”. Ted Francis purchased the Cameo Theatre in 1940 and since then it has been independently owned and operated by the Francis Family. This theatre is a pleasant, well-managed, and truly charming small town movie theatre. It currently operates with a reduced seating capacity of 348.

The Francis Family also operate the 99 W Drive-In in Newberg.

This beautiful Art Deco theatre is worth the drive from out of town to see a movie with a golden age atmosphere. In the 20’s and 30’s beautiful details did matter, and you can see it within the walls of this place that transports you to a time of glamour. Little change has been seen at the Cameo Theatre over the years, it’s a dream come true for history lovers. Open 7 nights a week.

My image of the CAMEO sign and marquee
www.flickr.com/photos/lastpictureshow/260361514

My close up image of the unique CAMEO marquee.

Oops. Please see close up of the CAMEO here.

Nice theatre,Marquee could use some work in the movie title putting up department.

Great marquee. Neon above is effective too. A treasure this is still open. Any interior pics?

Warner Bros. Studio opened the Cameo on Aug. 20th, 1937. The program that night was a Merrie Melody cartoon “With Plenty Of Money & You” followed by the main feature “Ever Since Eve” with Marion Davies. Although WB was hoping to put Ted Francis out of business, he eventually prevailed and bought the Cameo in 1939. It was an “Adults Only' theater for a long time. Not for content, but as in ‘no kids allowed’.