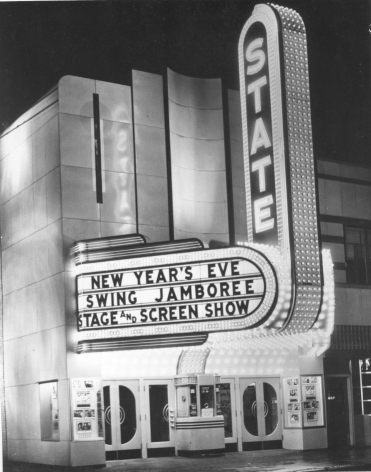 The State Theatre was opened in October 1937. By 1943 it was operated by Paramount Pictures Inc. through their subsidiary John Friedl.

Wish I could remember more about the State. I remember going there as a kid and getting in for $.85. It wasn’t as nice on the inside as the Palace Theater, located a few short blocks from there. The State Theater sat one half block off Broadway. We use to go to the movies and afterward eat at the Kopper Kettle, Just down from the theater. The last time I saw the building, before the demo., the doors were off and it was full of garbage. How sad! I think I saw The Hunchback of Notre Dame, starring Anthony Quinn at this theater, about 1960.

The October 23, 1937, issue of Boxoffice reported that the State Theatre had opened recently. The house was jointly operated by the Great States circuit and Peter Kalleres.

Kalleres died in 1943, and his obituary in the January 23 issue of Boxoffice said that at the time of his death he was operating the State and Grand theaters in Gary in partnership with Balaban & Katz. He had earlier operated other theaters in Gary, and at least two theaters in other towns as well.

Peter kalleres was my grandfather. trying to find any information on this fascinating era.