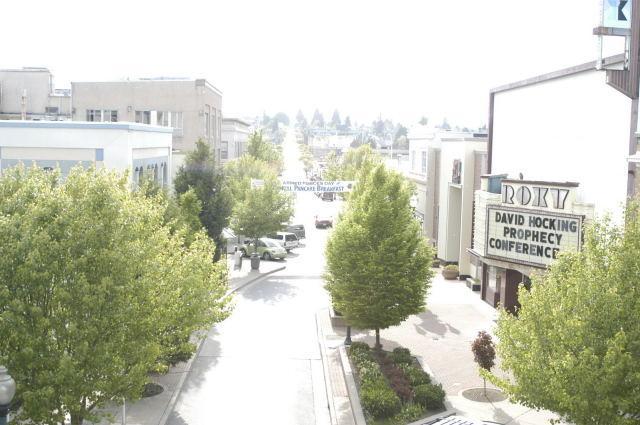 The Roxy Theater was opened on May 29, 1941 and was originally owned by Benjamin F. Shearer. It was designed by Bjarne H. Moe, one of the Pacific coast’s foremost theater architects.

The Roxy Theater still displays its original Pioneer Northwest Photographer Asahel Curtis Giant Photo Mural of Bremerton, The Navy Yard with the White
Fleet of 1908. At the time it was one of largest photo murals ever produced in the Pacific Northwest.

After closing as a movie theatre it was owned, operated and lovingly cared for by Calvary Chapel Bremerton, and was used for church services, as well as Christian concerts, events and movies. Its supporters call it “The Pacific Northwest’s most Intimate, Nostalgic and Rockin' Christian Venue.” It featured Solomon’s Porch Coffee House & Espresso Bar, plus events. As they liked to say “The Roxy now belongs to Jesus!”

Jesus has now left the Roxy Theater when the church closed due to foreclosure and it was taken over by a bank in late-2013. The building sat empty, but there was community action, supported by the Mayor to revive the building. Restoration began in July 2017 and it was reopened March 2, 2018 with a free showing of “The Greatest Showman”.

Contributed by Solomon's Porch at the Roxy
Get Movie Tickets & Showtimes

I forgot to add that the house brass lobby “load” sign reads 999.

We’re trying to rescue the Roxy and we need your help! Send your story to . Check out our website at RoxyRevival.org. I’d love to hear from you!!

Yes, it’s true, the Roxy Theater is now bank owned. We want to give it back to the community. Check out Roxy Revival’s effort on our website www.RoxyRevival.org. You can also like us on Facebook: https://www.facebook.com/RoxyRevivalBremerton or follow us on Twitter: https://twitter.com/roxyrevival.

You can Rescue the Roxy!!

It appears Calvary did the best it could in terms of upkeep. The building needs work, but its spectacular Streamline Moderne design (state of the art in 1941) has been preserved. Personally, I feel this design represents Streamline even better than The Admiral. The sweeping curves of the lobby and starburst wall decorations anticipate Googie style.

The Roxy officially reopened last night, March 2, 2018, with a free showing of The Greatest Showman to a packed house. The theater is in magnificent shape and is sporting a brand new marquee and sign.

Anyone have pictures of the interior of the projection booth?

Saw many movies at the Roxy in the 1960’s while my ships were in the shipyard. @ of the films I remember which had long lines and sell outs. Were “The Graduate” and Guess Who’s Coming To Dinner". Nice theatre.

A considerable of effort and capital has been exerted in both the restoration and updating the Roxy and it shows! A real jewel and well worth the drive to Bremerton. Great Dolby presentation!