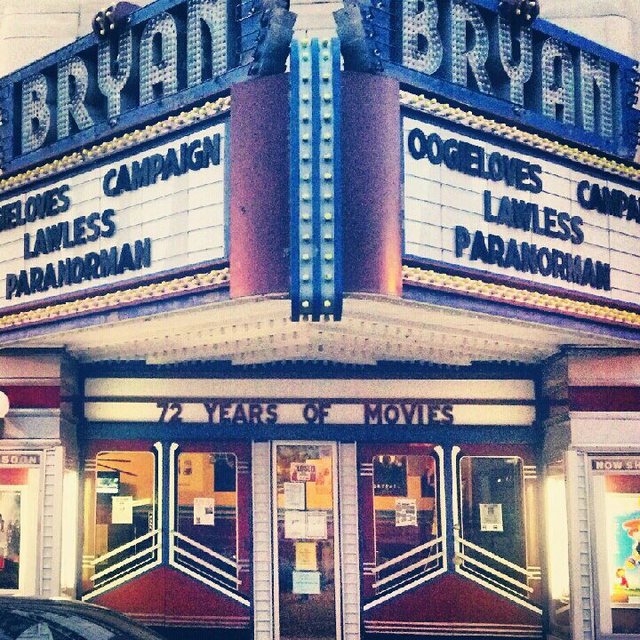 The Bryan Theater has been operating since 1939. By 1950 it was operated by Mis-States Theaters Inc. It was later twinned and by 1995 it had been converted into a triple screen movie theatre.

A comment and question asked on flickr: “The Bryant use to be a single screen. Were three additional screens built on or was the original auditorium spilt up?” With 688 seats I wondered the same thing.

I know that the Lions Lincoln Theater in Massillon, OH is listed in Cinema Treasures. Was this the theater Mr. Skirball built?

It may have been a different theater in Massillon that Mr. Skirball built. The Lions Lincoln was built by another architect in the mid-1910’s, and was also a former Warner Bros. house. Maybe the Skirball theater was built, closed, and demolished. The Lions Lincoln, which is still open, is the only Massillon theater listed here.

Looking at Newspaper ads as far into the seventies it was selling itself as an AIR CONDITIONED theatre.Thought that was odd.

Played “BILLY JACK” over two weeks,which is hard to believe with such a horrible film.“THE GODFATHER” had a two week run with ONE showing Daily.

The Folks at The Bryan Theatre before it was twinned always thought of the Kids,Saturday Matinee was often kid friendly,“KING KONG ESACAPES” i am sure played to a full house.1971.

It was called the BRYAN BIJOU in 1995 with Three screens,Wonderful theatre ruined I am sure.