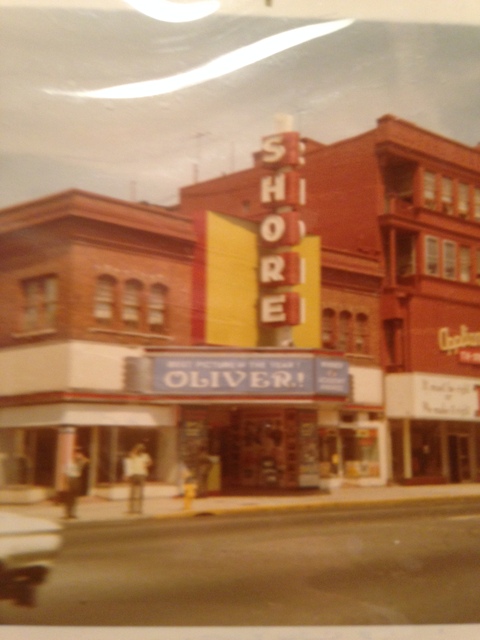 There were at least two Atlantic City houses called the Shore Theatre. This was apparently the last house to have the name. An article in the April 9, 1952, issue of Boxoffice Magazine said that Henry Waxmann’s Hollywood Circuit had moved the name Shore Theatre to the former Cinema. The previous Shore Theatre was then re-opened by an independent operator as the Beach Theatre (Crazy Bob got it right in his comment of Sept 18, 2006.)

Unfortunately, I’ve been unable to find any other references to a theater called the Cinema in Atlantic City, but from the comments above it sounds like this must have been a pretty old house, and so it might have had still other names, and might not have been called the Cinema for very long before becoming the Shore.

The address given in the description puts this theater about where the Beach was. If the Shore was between Ohio and Atlantic it would not be at 1318. Everything on that block was razed for the gas company building a while ago. Shore was also an aka for the Beach, according to a recent post.

If the various reports in Boxoffice are correct (and I see no reason to doubt them in this case) then this theater, the last to be called the Shore, was a former burlesque house that was taken over by Harry Waxmann in 1940 and renamed the Cinema, which was its name through 1951. It became the Shore in 1952.

So the Shore should have the aka Cinema, and the correct address is 1831 Atlantic.

Looking at Bing Maps for 1831 Atlantic this appears to be gone. Only some newer buildings and vacant lots are on that block.

in the summer of 1969 Oliver! was playing at the Shore. I have pics I took ,but am unable to upload

Rivoli 157 any chance of uplaoding those photo’s of Oliver in 1969?

This theater should be listed as demolished. The portion of the block where the Shore was located, is now occupied by a large steam and water supply plant, built in 1998 by a company called Conectiv. The facility is shown in the street view above, and is called the Midtown Thermal Control Center.