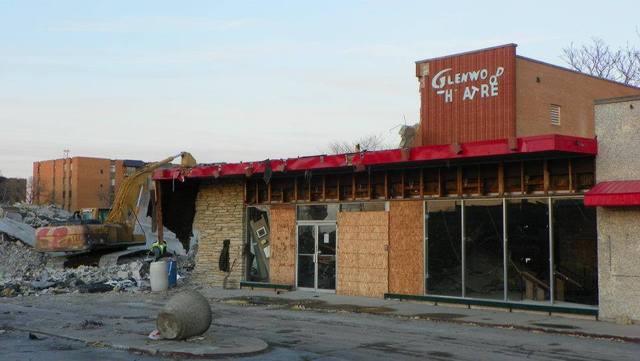 This theatre opened on February 18, 1966 with Hayley Mills in “That Darn Cat”. It was a single screen auditorium with around 1,000 seats. It was later divided into four screens. It was last operated by the Village Entertainment chain, but was closed in 2008. It was demolished in February 2012.

I agree, Paul. The building materials and blocky design are similar.

I’ll take some photos tonight on my way home and post soon.

The owner of record got what sounds like a fair settlement ($480,000 for a very depressed property) but it must have been terribly expensive to operate, and maybe it was highly taxed as well. From this point things should move forward. Sorry about the end of this story; it should have ended better.

As of December 28, 2011 the Glenwood Theatre is still in place; no sign of demolition preparations can be seen from the street.

As of February 7, 2012, the theater is currently being demolished :(

It’s really sad because my grandfather help build it, and my mother worked there when she was a teenager. Both of them are passed on now, so I’m glad neither had to witness what became of that theater. I added a picture of what it looked like the other day.

I finally drove by the Glenwood Theatre today; all is down but the foundation. It really looks like it was built very well. What a shame that a better effort was made to update it and keep it going.

Great demolition photo. On the other hand too bad this theatre couldn’t have been saved. I’ll bet it would have done well as a second run house.

Sorry to hear this theater has now been demolished.

My family and I moved to Glenwood from Lansing, Michigan in June 1978 and the first movie I saw at this theater was the original Star Wars (Episode IV – A New Hope) during its first rerelease in 1978. The last film I saw at the Glenwood was Raiders of the Lost Ark when it was rereleased in December 1982; five months later, my family and I moved to New Jersey. (after we moved to Jersey, it was through a movie listing in the Chicago Tribune I read the Glenwood became a quad.