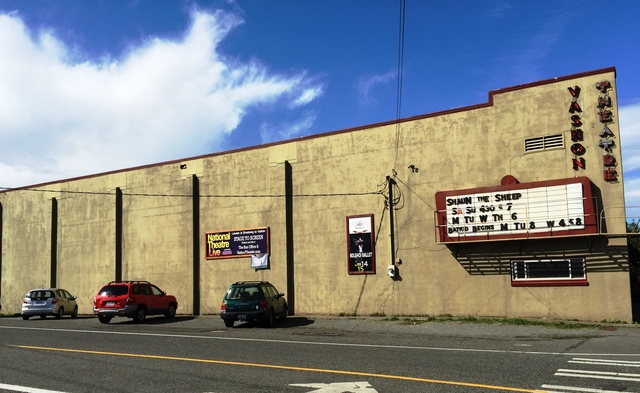 In operation since around 1942, the Vashon Theatre is the only theatre located on Vashon Island. The island can only be reached by ferry and has a population of just 12,000 people.

On the rear outside wall of the theatre, there is a weathered mural depicting classic movie stars such as Charlie Chaplin.

This theater’s Web site is www.vashontheater.com

This photo may have been taken sometime in the 1960s. I can’t decipher the films that were being advertised. The Shell station preceded the Chevron station in the post immediately above. As you can see, the Vashon was then the Island Theater, so that should be an aka:
http://tinyurl.com/3y3ory

Ken, I would bet that the sign is referring to a local family having twins, or something like that.

This picture was taken in 1947 right after this theater opened. The marquee say Joan Crawford’s “Possessed” (released 7/26/47) the second feature is Bowery Boys in “Live Wires” The mural on the back of the theater was painted by Janet and Nancy Cole in the late 1960s.