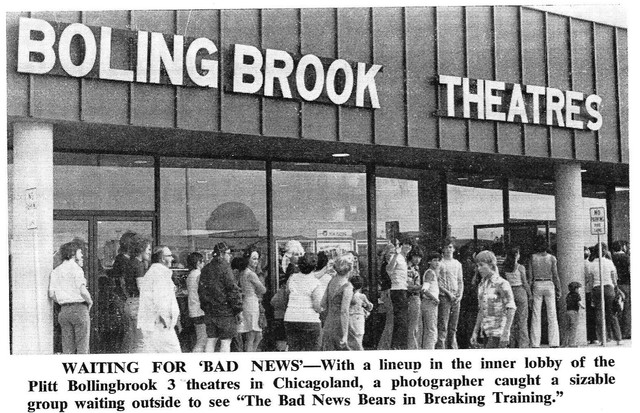 The Bolingbrook Theatre was opened on June 17, 1977 by Plitt Theaters. Its premiere movies were “The Other Side Of Midnight”, “The Boatniks”, and “Exorcist II: The Heretic” showing in its three screens. Soon a fourth screen was added and it was renamed Bolingbrook Cinema 1-2-3-4.

This theater opened siamultanously with the Orland Square theater.

On what parcel of land was this theatre?,what is on it’s site now?

Actually, the Menards is no longer there (it moved up north on Rt 53). Here’s where it all was: the Bolingbrook Theatre was located behind The Old Chicago Town Shopping Center, which was across the street (Rt. 53) from Old Chicago, which was an indoor amusement park. Everything was torn down (not all at the same time) except the K-Mart in the Shopping Center, which became the Menards that jimpiscitelli referenced above. To reference it all in Google Maps:

Argh. My last comment wasn’t clear about the location of the theatre. If you go a couple hundred feet north of the intersection of: Stevenson and Old Chicago Dr., you’ll be standing where the theatre was. It is now a street.

One more thing: If you use Google Earth (not Maps), and input the above address(es), you can view historical Satellite data. The Mar 30 1994 map shows the theatre and Shopping Center in their former glory (Old Chicago was long gone at that time). The next date available is Apr 10 1998, and it’s all gone. Amazing how much changed in that short period.

I was the relief manager (gave the manager his days off) from opening until my Fox Valley 4 opened the following December. I had to laugh remembering the “luxury comfort seating” line in the opening ads. Those were cheap Massey Polaris seats, which were neither luxurious nor comfortable! This theatre never really did much business, between the poor location and Bolingbrook’s lousy reputation at the time. Kerasotes had much better luck locating at the opposite end of town with their 12-plex.

It was rumored that this theatre was built to make a developer happy so Plitt could pursue more advantageous opportunities with that developer. The Bolingbrook was beset with problems from the outset. A partially completed exterior wall collapsed or was blown out by a wind storm and had to be completely rebuilt. The theatre was originally slated to be a duplex. At the last minute the decision was made to carve another auditorium out of a larger one. That auditorium was ridiculously narrow with just over 100 seats. Scope on that screen looked awful, flat wasn’t much better.

The building was sited lower than the K-Mart next door. There were potential water drainage issues. The front of the theatre faced west, over looking at a water retention area. Prior to opening it had rained. Standing water had created a pond. Some smarty made an impromptu sign naming the retention pond as “LAKE NEWELL” in honor of Frank Newell, concession manager for Plitt at the time. Mr. N got quite a kick out of the gesture.(RIP Mr. Newell, it was an honor to have known you.)The Bolingbrook had a large deep sump hole with a large pump attached to an alarm that would soound if the pump failed and/or the water level in the sump rose too high. Heavier snow and wind created entrance and egress problems if plowing was not done promptly. The road leading to the theatre was a downward grade going in, upward going out. The concession stand was nice but was surrounded by tile that could become deadly with a buttered popcorn or cola spill. The marquee was located at the stop light at the entrance off 53, high wind would easily rearrange the marquee.

Julius Conely, veteran manager, at the Hillcrest in Joliet tagged Bolingbrook as a mistake from the start. I believe he put it this way, “I could retire comfortably on what is being wasted at Bolingbrook.” (RIP, Julius)

With the theatre facing west, the late afternoon Sun would shine directly into the very small auditorium when someone would open the door. Prior to the theatre opening no one had thought about ordering lobby drapes. It was at least a month, maybe more, before they were installed. Had the cinema remained a duplex there would have been no or just a minor problem to correct.