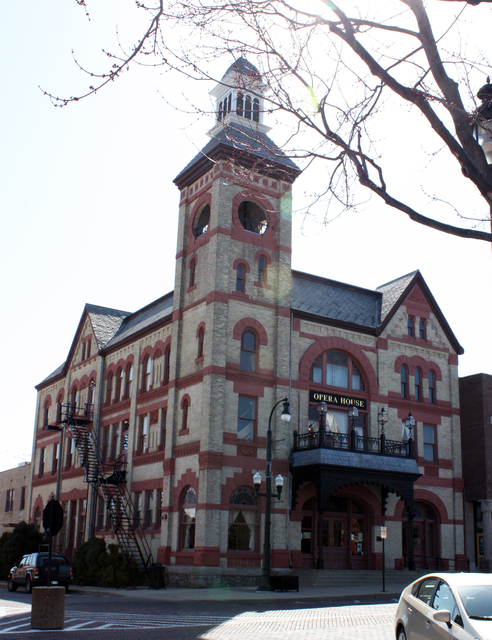 The Woodstock Opera House was built in 1890 to house Woodstock’s city hall, public library, fire department, and an auditorium located on the second and third floors. The Opera House has been at the core of community service since its construction. The Opera House established itself immediately as a community center of education, cultural, and civic activities that addressed a broad range of area needs, including literacy and research, forums for public discourse, artistic and cultural development, as well as public safety.

In addition to its more practical uses, the Opera House became McHenry County’s center for entertainment and hospitality. Touring dramatic companies provided diversion for area residents and business people. Farmers' wives chatted among themselves in the parlour while their husbands shopped in the market in the Square. Later, the Opera House became the site for the Chicago-area’s first summer stock theater.

In 1934, Shakespeare plays produced by Roger Hill starred Orson Welles—then a student at Woodstock’s Todd School for Boys. In 1947, a group of citizens formed and supported the Woodstock Players. The Woodstock Players provided acting experience for students graduating from the Goodman School. Now-famous personalities Paul Newman, Tom Bosley, Betsy Palmer, Geraldine Page, Shelley Berman and Lois Nettleton got their start in this troupe.

After more than 80 years of continuous operation and service the Opera House was in dire need of repair. A combined private and public effort resulted in the restoration of the Opera House. McHenry County citizens created the Woodstock Opera House Community Center, Inc. to work with the City of Woodstock in raising funds for the interior restoration.

The restored Opera House reopened in February, 1977, after two years of work and a $500,000 investment. The building was renamed the Woodstock Opera House Community Center to honor the interest and generosity of the many individuals, businesses, community organizations, corporations, and foundations which provided nearly two-thirds of the necessary funds.

Today, a spectacular variety of programming is produced or hosted by the Woodstock Opera House. Community theater, concert series, special events, and children’s activities are included in a year-round schedule of entertainment and educational opportunities provided by the resident companies and organizations. Community individuals, organizations, and businesses use the meeting facilities for activities ranging from film presentations to lectures. A visual arts exhibition series features the work of regional artists in a full spectrum of media.

The Woodstock Opera House is owned and proudly maintained by the City of Woodstock as a service to the public.

The Woodstock Opera House was featured in the Bill Murray movie “Ground Hog Day”. The opera house was resigned and the front became the entrance to the hotel.

This reminds me a tad of the Thomaston Opera House in Thomaston, CT at /theaters/2574/