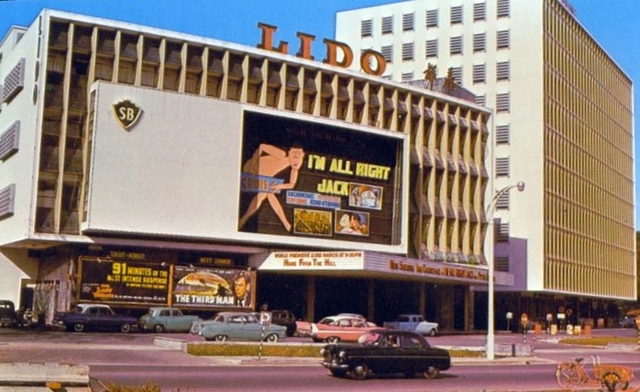 When it opened in 1959, the Lido Cinema was the Shaw Organization’s largest movie palace, even surpassing the large Capitol Theatre.

After 30 years of service, the Lido Cinema became part of a massive renovation and expansion project which turned the single screen gem into a part of the Shaw Organization’s new 22 story complex.

Completed in 1993, the new complex consists of 5 floors of shops and restaurants, 12 floors of office space, and a new Lido Cineplex with 5 screens (including the original Lido).

In 1997, the cineplex expanded again to include 8 auditoriums. Although the property has been dramatically altered, and the classic 1950s exterior of the Lido Cinema is now unrecognizable from this postcard, the original Lido One is still the largest theater with the widest screen in Singapore.

The original Lido theater was also the first cinema in Singapore to receive a THX certification and is now equipped with SDDS, DTS, SRD, DOLBY SR, and Dolby Digital Surround EX.

I saw Superman here in 1981 —– this was the last film I ever saw on a “reserved seat” basis. The Lido was still in its classic form. And of course this being Singapore, the theater was spotless. I stepped outside to a biblical rainstorm —– yes, it was Singapore!