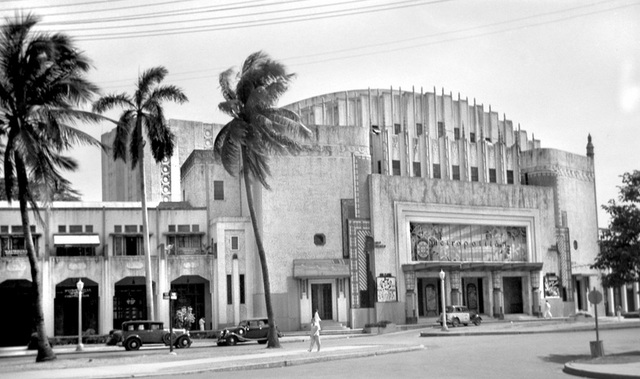 Built in 1935, parts of the theatre was converted into office space after closing. In 2007, a renovation/restoration project was begun.

updates on the metropolitan theatre, got to this web site;

more updates on the metropolitan theatre

Here is another photo:
http://tinyurl.com/3alox3

Visited by the President of the Republic on 27 Feb, the local press in Manila recently ran several stories about the restoration of this cinema, which seems to be ongoing. This is seemingly the third restoration, one after the war, one in the Marcos era, after which the cinema was allowed fall into decay. Seemingly, the main roof has been repaired and the orchestra pit is no longer submerged in water. (The Metropolitan is close by the river, so the cinema may be vulnerable to flooding, even if the roof is fixed.) 50m pesos has been allocated and the City of Manila is managing the rehabilitation. The House of Precast is restoring the proscenium it made in the 1930s and Kraut is working on the stained glass facade.

No re-opening date was mentioned.

Recent interior photos suggest that many original features remain, or have been restored to near original condition. There seem to be no seating fitted, nor any use of the premises at the moment.