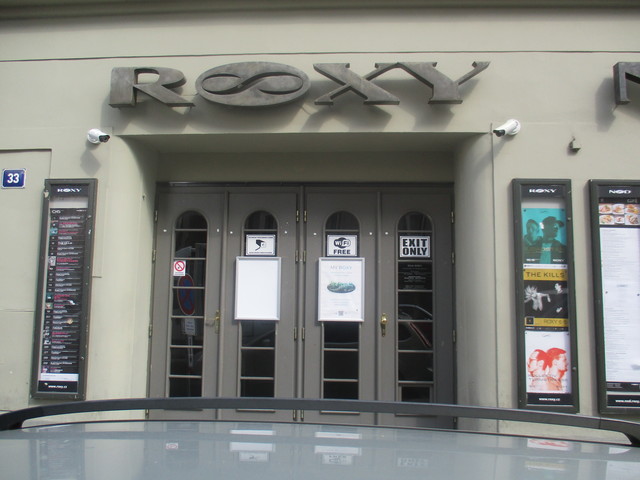 A large cinema in the heart of the old city, the Kino Roxy has seen exceptional troubled times as can be seen from these two extracts found on the internet:

“The Roxy, which was owned by Prague’s Jewish community, began life as a cinema in the 1920’s. During World War II the Germans used the Kino Roxy as a place to assemble Jews before putting them on transports to concentration camps. In the 1950’s the FAMU film school had a training TV studio there. By the beginning of the 1990’s the building had fallen into terrible disrepair. A decade ago the Linhart Foundation - a group of independent artists and architects founded in 1987, at the tail end of the communist era - began holding events at the venue”.

“The show was staged at the Roxy, Prague’s top underground hot spot, an old cinema with a weathered plaster interior which makes it look like a nightclub in a vast cave. The programme included the Czech premiere of ‘Faster Pussycat Kill! Kill!’ about 20 British films and a few local works. The audience was around 300 and the beer was delicious”.

As a basement cinema, a feature common in this city, it was badly affected by the disastrous floods in Prague a few years ago. The Roxy was repaired, but not restored, and much of the original cinema interior was lost. There is a very small foyer at street level from which patrons descended to a circle that had an unusual stepped frontage with long side arms. The ceiling had the supporting beams crossing the roof area unhidden. As can be expected, the height of the ceiling was not vast.

It hosted a variety of events, including some films, but by 2017 was a live music venue.

On a visit to Prague in June 2017 I noted that the Roxy was only advertising live music events.