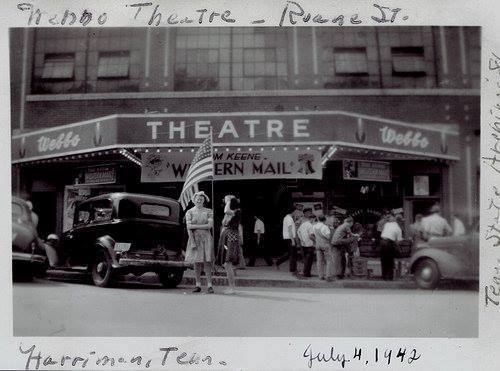 Possibly opened as the Palace Theatre. By 1941 it had been renamed Webbo Theatre. It was part of the Crescent Amusement Co. circuit in 1956.

From the Tennessee State Library and Archives (the original photograph, I’m sure, looks much better):

I grew up in Harriman and went to many movies at this theatre.. The correct name IS Webbo. The only remaining theatre out of four that were once in downtown Harriman is the Princess, which is currently in the process of being renovated and put to use as a community venue.

Here is a larger version of the same photo of the Webbo Theatre that is linked twice in earlier comments. The movie advertised on the banner under the marquee, Western Mail starring Tom Keene was released in 1942.

I believe that the Webbo might be the theater that opened in 1938 as the Palace, which was noted in this item from the July 5 issue of The Film Daily:

Peerless Enterprises was one of three independent theater chains that filed a lawsuit against Crescent Amusement Co. in 1939. A July 21, 1941, Motion Picture Daily article about the case had this to say:

:“Tim W. Smith, president of Peerless Enterprises, Inc., Knoxville, maintained under examination the previous day that Crescent competition and his difficulty in obtaining product had forced his newly-opened houses in Harriman, Morristown and Newport, all in East Tennessee, to close in 1938.”

I’ve found no later references to the Palace, so it’s most likely fate was to have been taken over by Crescent and renamed.

The Webbo Theatre’s address was probably 309 N. Roane Street. There is a sign above one of the adjacent storefronts that says Antiques, and in the middle of what was once the theater’s entrance is a faux column of red brick that doesn’t quite match the brick on the rest of the building. The next visible address to the north is 313, and the Roane Furniture Company to the south is at 301 Roane. The building is recognizable by its detail and large second floor windows as seen in the vintage photo.

Oops. I didn’t see OCRon’s comment with the address before or after I posted my comment last night. The reason I think the theater was at the southern end of the long building instead of the northern end where Chase Drugs is now is because of the configuration of the windows and the columns between them.

In the vintage photo there is a single column on the right and it looks like there are more windows beyond it. If you check Google street view you can see that there is a set of double columns between the northernmost three bays and the southernmost six bays.

The theater had to have been under the southernmost three bays, just south of the storefront that has the modern address 313 above the door, visible in street view. The two storefronts flanking the theater entrance must have had the addresses 307 and 311, so the theater would have been at 309.

You can’t really see it in Google satellite view, but the bird’s eye view from Bing Maps shows some really bad damage to the theater building, namely two big holes in the roof above where the stage would have been. Even though the nine bays of the facade all match, it looks like the theater was built separately from the rest of the building. It has brick walls rather than concrete, and a somewhat different roof line. My guess is that the double column was in the middle of the original six-bay building and the theater section was added later (though it could have been the other way around.) The northern six-bay section is in good condition, but I doubt the theater building will last much longer if it doesn’t get immediate repairs.