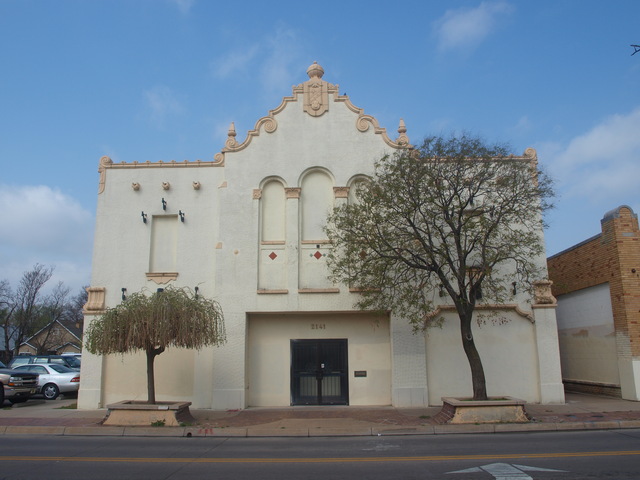 This theatre opened on April 3, 1929 with Nancy Carroll in “The Shopworn Angel”. After a period of screening adult movies, the Nomar Theatre was closed in 1983. My father purchased the property in the 1980’s and used the space for a furniture warehouse. It is now semi empty and I am trying to get him to restore it for a film house and playhouse.

When I was stationed at McConnell AFB in 1971 the theater was used to showcase local bands such as Crank. It was a favorite hangout for the local hippie community. If anyone remembers the guy with glasses who use to sit on the sidewalk wearing a fringe buckskin jacket-that was me.

During the half dozen years right after WW2 that we lived at 1919 Park Place – a couple of blocks from the Nomar – my sister and I seldom missed the Saturday afternoon movie – usually a Western. We would get in line early with our 9 cent admission [there was always a substantial pile of pennies at the window for change} so we could get a seat in the front row of the upper section. Good memories. Glad to hear of restoration plans.

Here is a collection of newspaper stories about the Nomar.

Talked with a couple of people who work near this theater and also read up on it using archives of the Wichita Eagle (particularly the story reporting the most notorious event regarding the Nomar, printed Saturday, March 10, 1973 buried deep in the paper on page 20C). Here, based upon these sources is additional information regarding the Nomar.

The theater stopped advertising completely with the Eagle on Sunday, June 2, 1968. Its final listed double feature was FANTASTIC VOYAGE and NONE BUT THE BRAVE, both of which were already two years old at least. There are listings before then showing alternating English or Spanish marquees.

The Nomar’s prime appears to have been the 1950s, when there were live musicians appearing alongside the movies, and they were able to show the 1959 BEN-HUR with Charlton Heston.

Sometime after it stopped advertising the theater went blue. Wichita already had at least 2 working adult theaters when the Nomar turned over, and a twin-screen called the Las Vegas 1 & 2 appeared some 2 miles west of it on N. Amidon (this particular theater at this writing doesn’t seem to be listed on CT). This metropolitan cluster of seamy cinema would soon draw the attention of the law.

On Thursday, March 8, 1973, Judge David Calvert—stating that the films could not be protected by so-called national community standards since they could not legally exist—ordered the Nomar’s closing for 2 years and seizing of the films in question from Jerwin Service Inc. This was the first ever closing of a Wichita movie theater based on a film’s content. Sheriff Johnnie Darr used $17 dollars worth of padlocks to physically shut its doors. The Kansas Supreme Court, as seen in the link provided on an earlier post, upheld the closing.

The final owner—as allowed in his lease—of the Nomar as a working theater was apparently a Mexican/Hispanic gentleman, who may have defaulted. It closed circa 1983.

The most recent attempt to revive the theater collapsed around 2011, purportedly because the city could or would not provide enough support to the proposal. Therefore, the Nomar’s status can probably be changed back to “Closed,” and the “Renovating” notation removed.

Addendum: CT'ers will note in the street view a parking lot next to the Nomar. This lot was completely unpaved for the life of the theater; the city ordered its paving approximately ten years ago.

Photo added to the photo page

Correction: Please note there were two (2) separate Las Vegas Cinema theaters operating in Wichita, one on N. Amidon and another on S. Seneca, both ordered closed at the same time almost immediately after the Nomar was shut down. Sheriff Darr again performed the honors. Boxoffice Magazine article: https://www.yumpu.com/en/document/view/31854970/boxoffice-april021973/35

Here is a story about the Nomar. 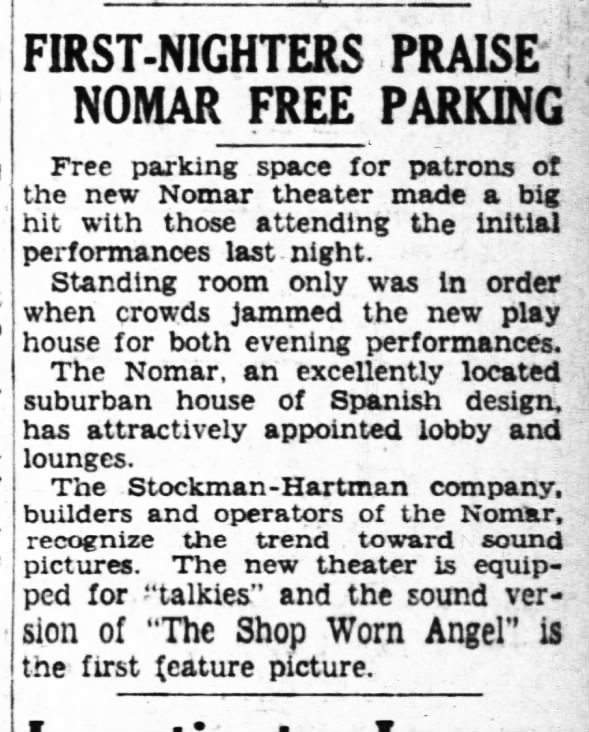 The Normar Theatre opened on April 3, 1929 with Nancy Carroll in “The Shopworn Angel.”