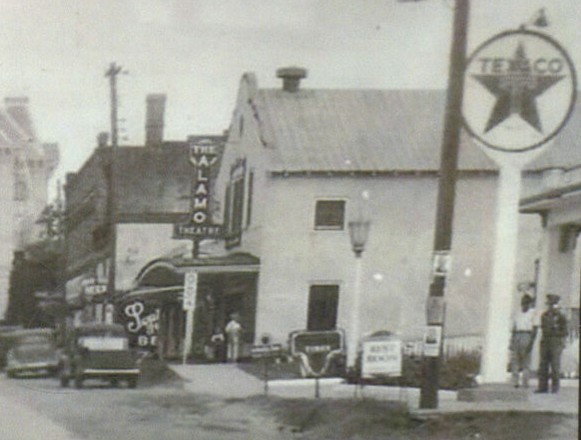 could you tell me, was it in texas, alamo theatre or else where.

Stopped by today and spoke with an older lady at a shop, she said the Alamo was torn down long ago, and a First State Bank now sits in it’s place.

She pointed right at this spot.

The last time the Alamo was operated was in 1962-63. My father (Doyle Oliver) rented it from the Struss family. They also owned the Oaks in Columbus which we leased a few months later. For awhile, both theaters were operated and I drove back and forth from Columbus to do so. The Frels Family and the Struss family were related and my father was General Manager of Frels prior to our leasing of the Alamo. We left in 1963 when we got the opportunity to buy the Allred Theater in Pryor, Oklahoma. I remember the projectors being so small that the carbon used for lighting wasn’t much bigger in diameter than a thick pencil.