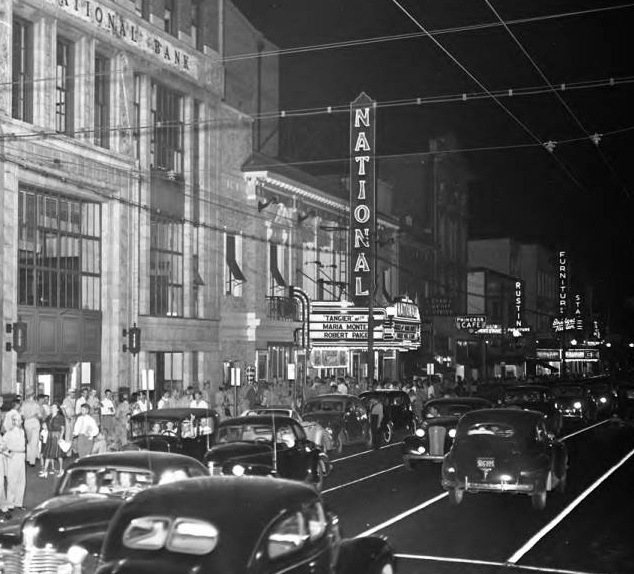 The National Theatre was located in the heart of downtown Greensboro. It opened in 1921 with a seating capacity of 1,800. The theatre had a mezzanine level and a balcony. During its early days it prided itself on its live shows and vaudeville acts. It also hosted touring productions of some of Broadway’s greatest productions, including Tallulah Bankhead in Noel Coward’s “Private Lives”, Joe E. Brown in the stage version of “Harvey and the original production of "Oklahoma!”, all presented live on the stage. As a movie theatre, it screened some of the greatest films ever to come out of Hollywood.

By the late-1950’s toward the early-1960’s it shifted from A-list movies to B-list movies, with the occasional “Dracula” type film. By 1966, the National Theatre closed forever, and by early-1967 it was demolished and was replaced by a parking lot.

I USED TO SPEND MY SATURDAYS AT THE NATIONAL THEATRE WACTHING TRIPLE FEATURES. IN 1959, I SAW THE HORROR OF DRACULA, WHAT A SCARY MOVIE.
IN 1967, THEY RAZED THE THEATRE AND BUILT A PARKING LOT.

The Robert Morton organ is now installed in the Carolina Civic Center. See http://piedmont-theatre-organ-soc.org/ For stories on the theatre and pictures of the Center Theatre.

This was a beautiful old place. Greensboro went on an urban renewal destruction rampage in the Sixties. The National was torn down for a parking lot, but for years you could see steps leading to nowhere at the sites of fine old houses. We can be thankful they saved the Carolina, another movie palace.

Rayson, The Cinema was on Tate St. near (really right at) UNC-G, NOT donwtown. Here’s a pic: http://www.uncg.edu/ure/alumni_magazineT2/2010_spring/feature_tatestreet.htm

This opened on November 28th, 1921. I uploaded its grand opening ad here.

My grandfather, Lawrence B Richardson aka Buddy was the projectionist here at the National Theatre from late 1920’s to 1940. My grandmother Mildred would also help to run this theater.

Elvis Presley’s live show at Greensboro’s National Theatre was a major event on February 6,1956 with 2 matinee performances and 2 evening performances that were basically sold out within minutes of the beginning date.