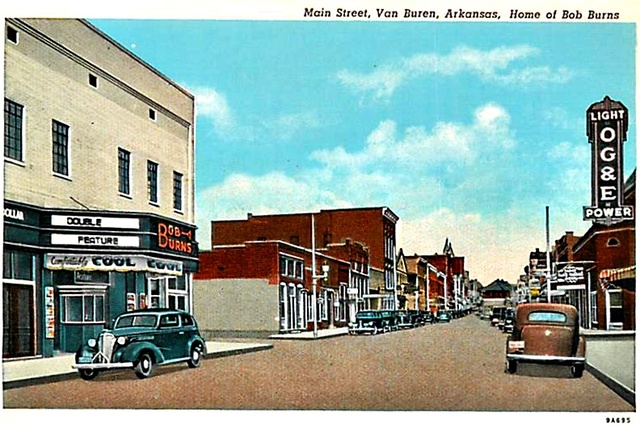 The Van Buren Opera House was opened in 1901. It was remodeled in 1937 and reopened by Malco Theatres as the Bob Burns Theatre. By 1941 it was operated by Paramount Pictures Inc. through their subsidiary M.A. Lightman. It now operates as the King Opera House.

It was the Bob Burns Theater in 1963, when it was part of the Malco Theater chain.

This theater was listed in the 1901 edition of Julius Cahn’s Official Theatrical Guide as the Van Buren Opera House. A web site listing supposedly haunted buildings in Arkansas gives 1901 as the year the theater was built, but it doesn’t name a source for the information.

The theater had been remodeled outside probably in the 1930’s to look like a typical small theater of the times. It had a large marquee and a large vertical neon sign. I was never inside so I don’t know what may have been done to modernize it.

It was named for Bob Burns, a Van Buren native son, who had a national reputation as a comedian. He invented the bazooka, a musical instrument that gave its name to the weapon. He used Van Buren in his comedy routines unlike many performers who used fictional town names. Today Van Buren is doing its best to forget Bob Burns.

Malco ran it as a second-run A movie theater. I seem to remember that it did show double features occasionally.

All signs of the Bob Burns theater have been removed. It has been restored to what apparently was its original configuration. It is used for occasionaly live performances.

An interior view can be seen here.

1949 photo added courtesy of the AmeriCar The Beautiful Facebook page.

The remodeled and renamed Bob Burns Theatre opened in 1937, as noted in this item from The Film Daily of July 3:

“Van Buren, Ark. — The new 615-seat Bob Burns Theater here opened with the current Bob Burns picture, ‘Mountain Music.’ M. A. Lightman, president; and M. S. McCord, secretary-treasurer of Malco Theaters, Inc., were present. Exterior of the building is in white with a marquee indirect lighting sign in front. The name ‘Bob Burns’ and a large ‘bazooka’ are in neon. Harry Vise is manager.”