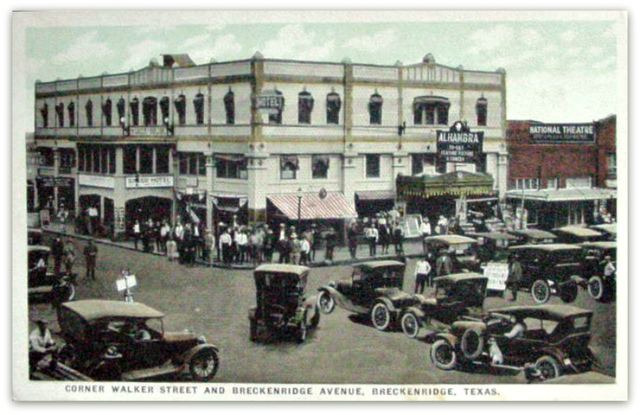 The National Theatre was opened in late-June 1921. It was later renamed Regal Theatre.

This Theatre is being renovated… They were holding a Fund Raiser.
Pictures to come……

This is a July 1988 photo of the National Theater bearing a sign identifying it as the REGAl THEATER.

As recently as 1970 the National was known as the Regal Theatre.

From the early 1900s a postcard image of the National Theatre in Breckenridge.

That appears to be the Alhambra Theater in Breckenridge which has its own page here on CT.

Oops; thanks for pointing that out; I had just previously been looking at the Alhambra page, which has the same postcard view, did not notice the theater’s AKA.

“F. W. Zimmerman opened the new National theatre at Breckenridge, Texas, last week to pleased capacity business. The new house is strictly modern and up-to-date and said to have cost $750,000. The new theatre is strictly fireproof.”

I will assume that the figure of $750,000 is Texas-sized exaggeration. There’s no way that little 500-seat house cost three quarters of a million in 1921.

A bit of confusion arises from an item in Boxoffice of October 9, 1967. It says that Regal Broadcasting, owners of local radio station KSTB, were building a new 300-seat theater to be called the Regal. The company had bought the Palace Theatre and the National Theatre, and the National had been razed so the Regal could be built on its site. The Palace would continue to operate until the new theater was completed.

It appears that the writer of the Boxoffice item got the names of the theaters switched, and the house that was demolished was the Palace. Presumably the new Regal never got built, and the National was renovated and renamed the Regal instead.

Another house called the National Theatre was in operation in Breckenridge before this house opened. It was advertised in the October 16, 1920, issue of the Breckenridge American, as were the new Alhambra Theater, set to open on the 18th, a House called the Broadway Theatre and another called the American Theatre, plus the Ruby Theatre. The ad for the National boasted of its “Photoplayer Supreme.”