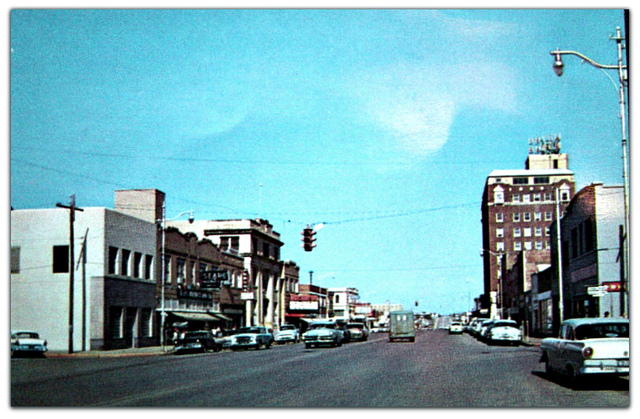 Opened by 1926, this was the first Palace Theatre to operate in Breckenridge. The name was transfered to the Alhambra Theatre in 1929 and after a short period of time this theatre reopened as the Plaza Theatre, operating until 1945 when it was renamed Buckeroo Theatre.

From the late 1950s a photo postcard image of the Buckaroo in Breckenridge.

The Breckenridge American newspaper shows two additional theaters. The Corral Drive In and the Trail Drive-In were open in Feb.1955.

I looked for the address in the newspaper but found none in this issue. I’ll keep looking for them and update the information.

Buckaroo was an aka for the first Palace Theatre. The Palace name was moved to the old Alhambra Theatre, 102 E. Walker, at some point. The various photos of theaters in Breckenridge make this clear.

The 360-seat Palace Theatre is last listed in the FDY in 1929, as is the 500-seat Alhambra. In 1930 the Palace is listed with 546 seats, indicating that it had moved to the old Alhambra Theatre building by the time that edition of the FDY was compiled. The name Buckaroo Theatre does not appear in the FDY until 1945, but I don’t think the old Palace was vacant all that time.