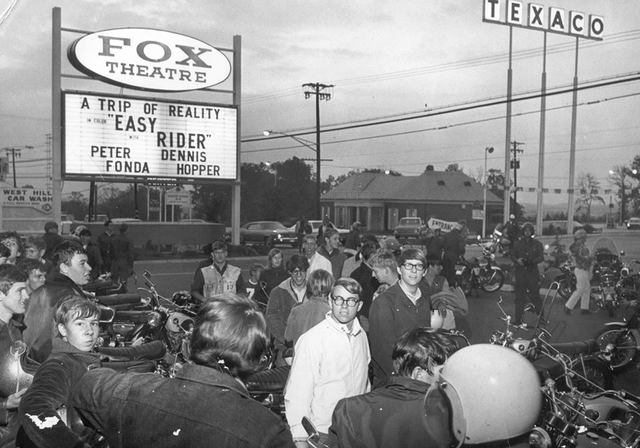 The Fox Theatre was opened in July 18, 1969 with Richard Benjamin in “Goodbye, Columbus”. It was operated by National General’s Fox Eastern Theatres. It was closed by Mann Theatres on January 7, 1979 and converted into a record store.

Patsy, I think you confuse our Fox with a much older, finer hall. This was just a plain-jane, 1960’s box on the highway: it’s nothing worth resurrecting. Only the name “Fox” connects it to the extraordinary buildings in Atlanta, Detroit and St. Louis.

Will, Thanks for the Fox explanation.

This was one of NGC’s attempt to expand across North America reaching as far of Montreal,QC.

Here is a 2009 photo of the former Fox Theatre.

The Fox opened on July 18, 1969 and had 800 seats. The one thing that I remember about this theatre is the projection booth was only four steps above the back row of seats. They had a continual problem with people standing in the back row and playing shadow puppets in the projector’s light.

I have posted articles from the Knoxville News-Sentinel of the opening and closing of the Fox in the photo section.

I remember my mom taking my brother and I to see several movies at this theatre back in the early 1970’s when we first moved to Knoxville in 1971. It was either this theatre or the former West Town Theatre that fronted West Town Mall. We lived on Alki Lane at the time. My late father (Bob Stewart) was a professional musician and entertainer who played several nightclubs on the west end at the time (Bobby McGee’s on Northshore Drive and the Tiki Lounge further down Kingston Pike) so we’d end up here whilst dad was at work. Eventhough my reading level wasn’t so good at the time, I do remember the marquees that were on the front of the building and the one facing Kingston Pike that had the Fox name above it. Shortly after this theatre closed, I remember it became a music store called “Music Isle,” which later moved to a location on Downtown West Blvd. Bought several cassettes from them including Eagles “The Long Run,” Supertramp’s “Breakfest In America,” and the soundtrack to the movie “Teachers” in 1984. Glad to see that David’s Bridal has kept the original marquee facing Kingston Pike, although they have modified it to their use.