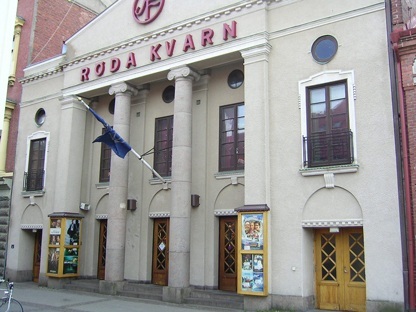 Opened on 19th February 1926 by the Svensks Filmindustri (SF) chain of cinemas, the theatre sits on Lilla Torg (Square) in the heart of Halmstad. Designed by architect August Svensson, the facade of the Roda Kvarn resembles an ancient Greek temple. The name of the theater appers in bold red letters below the pediment, and on the pediment itself, the SF logo of the chain.

The enormous pink granite columns are topped by Ionic capitals, and tower two stories from the ground. The interior featured a 500-seat auditorium with a star-filled sky ceiling, and Art-Deco style light fixtures which incorporate the letters SF. The foyer contains elaborate decorative panels depicting mythological figures, and also contains stylish lighting fixtures, which date to the late 40s or early 50s. The balcony is supported by columns with Ionic capitols as well, which mirror the ones on the facade on a smaller scale. The theater’s name, incidently, means Red Windmill, or Moulin Rouge.

In 1987, the Roda Kvarn was taken over by the Svenska Bio chain, and converted the neighboring turn-of-the-century era former firestation into four small additional screens, in addition to the original audtiorium, which now only sat about 250.

In 1994-5, the Roda Kvarn was given a painstaking restoration, bringing back the house to its original 1920’s glory, including recreation of lost decor returning the original color schemes. In 1994, Halmstad named the theater a historic site due to its great cultural and historic value to the city. It continues to operate as a multiplex to this day.