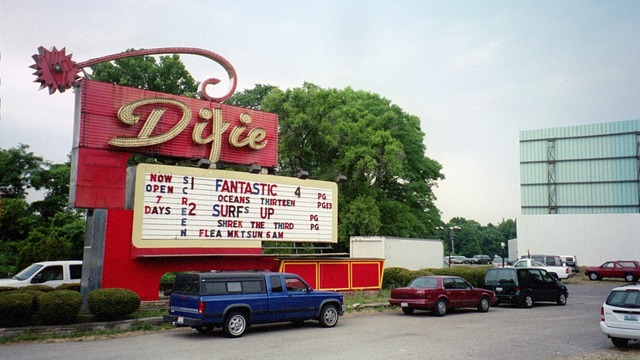 Opened July 12, 1957 as a single screen drive-in. The opening program featured a Kartoon Karnival and 4 feature movies: Andy Griffith in “A Face in the Crowd”, Dean Martin & Jerry Lewis in “Living It Up”, John Dehner in “Revolt at Fort Laramie” and Bob Hope in “The Seven Little Foys”. It was twinned in around 2002. The Dixie Twin Drive-In operates from April through November. It has a capacity for approximately 900 cars.

Just arrived home from the theater tonight. I can definetly say this is the worst theater I have ever tried.
We had company from out of town and thought it would be a fun experience. Cars are allowed to drive throught the show.
Children are running around without their parents, even going so far as to continually throw rocks at the back of our lawn chairs.
If my 16 month old niece or and of my three children had been hurt there would have been a major blowout. But a certain
leniency is to be expected in an out door theatre, more relaxed, and family friendly, not having to hush small children into being as quiet as
a funeral. It is usually great fun. And putting up with squeeling children and the occasional honking horns is just part of the experience. My
teenage son asked if he could go to the bathroom, and I told him to be quick, and be careful. (I just had major surgery, and could not hand deliver
him to the bathroom. He came back quickly, and I might say quietly. The next thing I knew a Security idiot came up to my son and proceeded to shake
his finger in his face informing him that he had been told not to run, and he had better listen when the idiot told him to. I do not have a problem
with rules, Especially if they are posted so kids know what they are. My son said he did not hear the man, if he had he would have fallen over
himself apologizing, because the is just the way he is. It is idiots like this who are causing kids not to respect authority. He stepped over the line
by getting in my son’s face with his finger and his little power tirade. Fear can be instilled, but respect is earned. And that idiot does not deserve
a spec of respect. A minor should never be approached by an adult to be abused in a verbal tirade, I should have been told of the situation, and I
would have backed up the man even if I didn’t agree with him, because I believe you should respect authority. He was a jerk, he was totally out of line
and I believe he should receive discipline. I am completely appalled at the abuse of someone with authority, I hope he went home with a little stronger
feeling of his importance, and find a new career, because he is a jerk.

That doesn’t sound like a fun night at the movies. Too bad.

This was listed as the Dixie Drive-In in the early sixties. It may have been a single then. Operator was Sam Levin. Capacity was 850 cars per the 1963 motion picture almanac, but all the figures given by this book seem rounded off, so consider it an estimate.

Here is another photo:
http://tinyurl.com/yg2tn6l

A Dixie Drive-in in yankee land,strange.

This opened on July 12th, 1957. Grand opening ad in the photo section.

google earth pro’s newest aerial was taken when they were mainting the screen so you ccan see someone in a crane maintaining the screen.